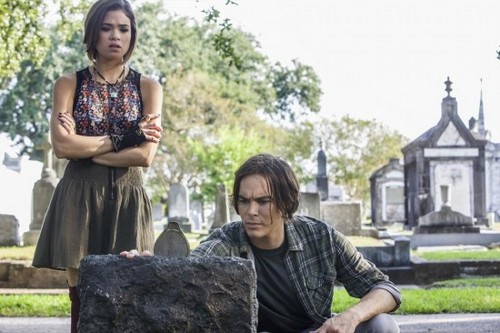 Tonight on the ABC Family their new series RAVENSWOOD premieres with its pilot episode.  Ravenswood will center on a town, not far from Rosewood, PA (the home base of Pretty Little Liars), which has suffered a deadly curse for generations. Five strangers suddenly find themselves connected by this fatal curse and need to dig into the town’s mysterious and terrible history before it’s too late for each of them. Pretty Little Liars‘ Tyler Blackburn (Caleb) will star.

On tonight’s show, after opting to stay in Ravenswood to help out new pal Miranda, Caleb begins to rethink his decision, especially after he meets Miranda’s cold and unwelcoming uncle Raymond (Steven Cabral). Caleb also has some unpleasant interactions with local resident Luke (Brett Dier), who is struggling to deal with a recent family tragedy and its ensuing scandal, which has also swept up his twin sister Olivia (Merritt Patterson).

We hope you stop by for this new show!  If you are fans of Pretty Little Liars I am sure you will enjoy it.  Make sure to come back here later tonight at 10 PM EST for your LIVE recap. What are you most looking forward to this season?

The show opens up at the cemetery. Caleb and Miranda talk about the strange photo they found on the gravestone, which strangely resembles Caleb’s face. They get ready to go visit Miranda’s uncle, Raymond, and they’re both a little uneasy about venturing further into this mysterious city. As they walk away, the angel statue begins crying a thick substance, what looks to be blood.

Raymond drives up in an old car and out comes a man, middle-aged. Raymond pulls out a body from the back of the car — he must be a mortician. Carla Grunwald, who helps run Raymond’s bed and breakfast, shows Miranda inside and says Raymond has no other family left.

Caleb questions Raymond about why he and Miranda saw their photos at the cemetery, but Raymond isn’t forthcoming with information and tells Caleb to encourage his niece to leave.

Caleb wants to take a photo of the gravestone with the man’s picture that resembles his own face, but when they go back to the correct place, the photo is no longer there. Caleb suspects Raymond did something to cover everything up. Caleb wants to go into town and check out the town records.

Caleb walks into the Ravenswood Gazette (town paper) to see if he can get his hands on the obituary. He asks a girl, but then her father, who runs the paper, walks over and steps in. He says he can’t have people just “looking around” and suggests Caleb go look at the town records to get more details regarding the mysterious Caleb Rivers supposedly hiding within his family line.

Miranda walks into a room to talk to Raymond; she doesn’t understand why he abandoned her when her parents died. He thought it would’ve been better that way, but now he understands that perhaps he made the wrong choice. Miranda wants answers about her parents. Grunwald comes in and pulls Raymond away, telling him the family of the body he’d just prepared for the funeral have arrived. Grunwald tells her to “be patient; you brought questions, but you also brought memories.”

Caleb goes to a coffee shop and runs into the girl from the paper. He shows her a picture on her phone of the mysterious man that looks like Caleb — and asks him if it helps, though she was unable to locate any obituary.

Olivia is talking with a friend, Tess, who wants to know if she’s not going to some event tonight because of her father’s death. Tess says that Luke and her need to get their heads out of the shadows. A boy named Dylan pulls up in a nice car and offers his hand to Olivia; they kiss. The event sounds like Homecoming.

Meanwhile, Caleb tells his new friend, Remy, about what he saw, but she doesn’t exactly think it to be strange. She says this town has a different definition of “normal.” She says the weirdness just comes with the territory.

Luke also happens to be at the coffee shop and another kid picks a fight with him. Caleb sort of intervenes to help out. After the fight, a man named Benjamin introduces himself. Caleb introduces himself as “Caleb Rivers” and the man’s face instantly grows with suspicion.

Remy and Luke take a walk; Luke says that he misses talking with her, and she says, “Then why did you stop.” She says that she came here to take care of him. Remy’s dad, like a creeper, pops out of nowhere and pulls his daughter away from Luke — the guy with the mother who allegedly killed her husband.

Miranda looks through a photo album and stumbles across some pictures of The Great Fool. As she flips through the book, a brush somehow falls off the table and a corpsish hand slides against the wall. A dark figure appears behind her, but then disappears. She screams.

Caleb and Miranda are talking. Grunwald enters and says that Raymond wants them to stay for dinner.

Olivia asks Luke if he’ll be attending the parade tonight, but he says no. Luke says he can’t even believe she’s going. Luke says that Tess isn’t her friend, that she uses her to feel better about herself.

At Remy’s house, they have a family dinner. Her mother just returned from Afghanistan. Remy’s father forbids her to see Luke again; he says he’s bad news.

Miranda begins looking through the photo album and Caleb heads to take a bath. In the album, Miranda finds a note from her mother, speaking of how she can’t wait for her to be born.

Caleb gets in the bathtub; as he lays against the tub, he hears a sound. The water faucet turns on by itself and, no matter how hard he tries, he can’t turn it off. A shadowy figure grabs the shower curtain and forces it down onto him. He’s drowning, but the figure soon disappears, and Caleb catches his breath. But he doesn’t understand what just happened.

Everyone heads to the parade.

Remy is getting ready to head out, but before she does, she asks her mother if she’d having nightmares again. Turns out she’s a doctor who lost everyone else in her unit, which was attacked. She’s suffering from incredible amounts of guilt and PTSD and says she needs time to figure everything out.

Meanwhile, Raymond does some bookwork. Grunwald comes in and says, “It’s not too late to fix this.” Whatever that means.

Miranda waits for Caleb at the parade. She turns around to see that mysterious figure, a woman, but turns around and it’s just Caleb. Caleb notices Remy sneaking into the Ravenswood Gazette; they follow her inside.

The parade continues as Remy looks through some old papers. She comes across a page that says FIVE TEENS KILLED. She hears a noise and suspects someone has followed her inside. She gets up to check out the noise and is surprised to find Caleb and Miranda. Remy says it’s “kind of illegal to be here.” But Caleb and Miranda want to know why they saw their photos on those graves. Remy is empathetic to their curiosity and desire for answers and offers to help them out.

They look through the old papers hoping to discover answers. Meanwhile, at the parade, Olivia is splashed with a cup of red paint. Dylan gets out to go after her, but she runs away. She runs into Luke and says, “Please don’t say I told you so.” He is kind, gives her his jacket, and they head home. They are outcasts.

Remy, Caleb, and Miranda discover that the five kids that died drowned, and they all died the same day. Remy feels uneasy and says that they should get out of here. As they leave, we see Raymond lurking around a tree — he watches them.

Olivia and Luke walk back home and talk to each other. Olivia says, “I get why you’re sad, but why are you so damn mad?” He admits that he thinks their mother killed their dad. Olivia is unsure how to react.

Remy admits that the reason she was at the paper tonight was because she was looking for answers: Why was her mother the sole survivor in an attack that should have killed everyone. Remy says that she’s telling them this story not for sympathy, but because she thinks that they, Caleb and Miranda, might somehow be intertwined in this convoluted story. Caleb doesn’t understand. Remy elaborates: there was an older soldier who survived an attack much like her mother and, when he returned, five Ravenswood teens died. A similar situation occurred not long after her mother died. Five more Ravenswood teens died.

They pull beside Olivia and Luke. Remy offers them a ride. Luke is reluctant to ride in the same car as Caleb, but they do. They drive away.

Meanwhile, Raymond is sitting in his study drinking something strong.

Remy is driving and the mysterious shadow woman appears in the middle of the road. They drive off the bridge and their car crashes into the river. It seems as if they’re going to drown.

That’s the end of the episode! What a creepy story to be told this season!