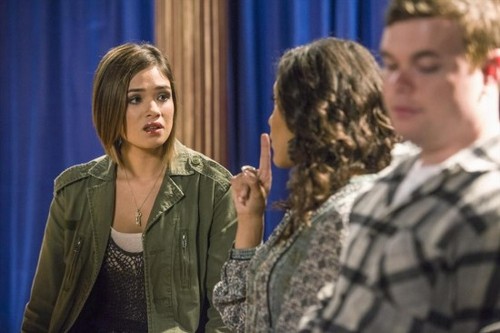 Tonight on the ABC Family the new series RAVENSWOOD continues with a new episode called “The Devil Has a Face.”  On tonight’s show, Caleb meets a long lost relative in the hopes of better understanding his current situation in.  Did you watch last week’s  episode?  We did and we recapped it for you, right here.

On last week’s show, Luke was resistant when Caleb and Remy try to convince him that Ravenswood is being plagued by the supernatural. To convince him, they decide to try and contact the “other side.” Olivia begins her own investigation into her father’s death, which turns much more sinister than she was expecting. Remy grows more concerned about her mother, who recently returned from Afghanistan. And while Miranda continues to yearn for a connection to her family, she begins to feel like someone, or something is watching her.  Meanwhile, everyone gathers for a somber event, and Raymond and Miranda both offer Caleb a reason to stay in Ravenswood.

On tonight’s show Still unnerved by what he witnessed during the séance, Luke searches for a distraction, but realizes there may be no escape from what’s haunting the group. Olivia bonds with Miranda and is surprised to discover their families may have a shared history. And Caleb is caught between new and old loyalties when he struggles to share what’s happening in Ravenswood with Hanna.  Meanwhile, Remy and Caleb investigate an intriguing new clue into the town’s past. Luke is surprised to find common ground with Tess. And Miranda thinks she may have finally found what she has been searching for.

We hope you stop by for this new show!  If you are fans of Pretty Little Liars I am sure you will enjoy it.  Make sure to come back here later tonight at 8 PM EST for your recap. What are you most looking forward to this season?

The show begins with Miranda wandering through the graveyard. She’s looking for Abby. She stumbles across Abby’s grave and the gravestone shatters. Miranda also sees some other ghosts.

Caleb’s computer is being all weird — and he’s trying to write Hanna a letter, but he’s having a difficult time putting his thoughts down on paper.

Olivia and Luke have a chat. Luke is still extremely rattled by the seance. Lukes wants Olivia to stay away from all this supernatural business. He tells her to leave it alone.

Remy is getting a glass of water. When she looks down at the glass, she sees that it’s being filled with blood. She was hallucinating. She drops the glass; when she looks out the window, there’s a raven watching her.

The next day, everyone chats at the coffee shop. Caleb says that they need to make their own pact — they need to look for someone who’s willing to talk about the curse (or whatever’s going on).

Luke invites Remy out, but she’s not totally thrilled about the idea. Luke’s riding to school and his bike falls apart. There’s a dead raven stuck in the spokes.

Raymond and Olivia’s mom run into each other — and they’re more than friendly. Olivia asks her mom how they know each other. She tells Olivia that they’re old school friends.

In class, Luke has a chat with his teacher. His teacher’s worried about his grade, so he invites him to participate in a play.

Remy and Caleb chat in the graveyard. They think they might’ve found someone who can help them out with things; they wonder whether or not they should go see the person. The word “GO” burns into the grass. So they head there immediately.

Caleb and Remy arrive at the retirement home and ask the elderly fellow about his older brother, who was also named Caleb.

Olivia visits Caleb’s house, but he’s not there. She knocks on the door. When she walks away, the door swings open. She calls him name. No response. The door swings shut and Miranda appears to Olivia. Olivia asks Miranda if her uncle “does away with people who know too much.”

Caleb and Remy chat with the old man. He says that his father completely lost it when the Old Caleb Rivers died — he went missing. The old man says, “Why don’t you ask me what you came to ask me.” Caleb asks him about the car accident — and he wonders about those “accidents” and the “pact.” The old man says that Caleb is careless and that he must pay more attention to the moves he makes.

Miranda is in her uncle’s study; she sees him cleaning a knife, an “old tool of the trade.” She wonders if this is the weapon that killed Olivia and Luke’s father.

Miranda wants Caleb to let everything go and to return home; she tells him that she wrote him the email he was struggling to write. All he needs to do is send it.

Caleb’s old uncle he went to chat with shows up and hands him a set of keys. He’s quick to leave. Before he departs, he says, “It’s your turn, boy. I’ve done my part.”

Miranda leads Miranda into the room with the knife.

Meanwhile, Luke and Olivia’s ex-BFF have the lead roles in the play. They kiss.

Back at Ray’s creepy funeral office, Olivia and Miranda discover a set of drawers. Raymond collects the hair of all the children that have died in mysterious accidents. Miranda gets angry and her jar explodes. After it explodes, she can suddenly leave the graveyard.

Caleb and Remy try to discover what the keys go to. They find a rusty old tin box.

Luke gets overwhelmed, and it kind of sounds like they’re breaking up.

Caleb confronts Raymond. He looks for the hair collection — but Ray must’ve moved it.

Back in his room, Caleb manages to kick open the rusty tin box. We’re not sure what he finds.

Miranda seems to be free now; she finds her mother and they walk through a white-light door.