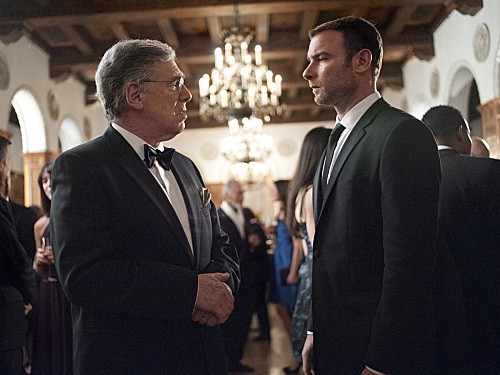 Tonight on Showtime their new drama RAY DONOVAN continues with a new episode called, “Twerk.” On tonight’s show Mickey is approached by an FBI agent with a Hollywood obsession. Did you watch last week’s series premiere episode? If you missed it you can read our full and detailed recap, right here.

On last week’s episode Ray activated a plan to send his father Mickey back to prison. His father Mickey, played by Jon Voight, had other plans though and spent time with Ray’s wife Abby, played by Paula Malcomson and their kids. It was a serious betrayal that will have lasting implications. Ray handled two crises involving movie star clients: A-list actor Sean Walker (Johnathon Schaech) received a threatening message at home, and action hero Tommy Wheeler (Austin Nichols) was blackmailed with a sex video.

On tonight’s show Mickey (Jon Voight) spends time with Bunchy (Dash Mihok) and Terry (Eddie Marsan), insinuating himself back into their lives. Ray “buys” a talented hip-hop artist for his rapper neighbor. Ray’s mentor, Ezra Goldman (Elliott Gould), holds a fundraiser in honor of his late wife, but he’s haunted by the sins of his past. Meanwhile, Mickey is approached by an FBI agent with a Hollywood obsession.

Tonight’s series premiere looks like it going to be great and you won’t want to miss it. So be sure to tune in for our live coverage of Showtimes’s Ray Donovan episode 3 — tonight at 10PM EST! While you wait for our recap check out the sneak peek video below of tonight’s episode!

The show begins with Ray driving and looking at the info about the priest that was murdered. He pulls up to his house and walks in to what appears to be an empty house. He looks at the family tree that Bridget made and notices the picture of her and his father. He packs a bag as Abbey, who is home yells at him about being gone for 5 days. She goes on about their day with Mickey. Ray won’t talk to her as she rattles on. When he does talk her says that Andrew ‘s party is tonight and she should be there. He tells her to buy something nice. She throws shoes at him as he is leaving. In a pissed off mood Ray heads to the neighbors with the loud music and pulls all the cords out of the stereo. Ray introduces himself to a guy who wants Ray to do a job, he has heard of him from Denote.

The neighbor wants to get his son emancipated and needs Ray’s help. The kid is like the black Justin Bieber, his words not mine. It ends when Ray tells him to call Lee and to keep the music down. Ray then leaves as Abbey comes out yelling at him about laundry.

In Boston at St. Joseph’s church Avi watches as a man prays then follows him as he leaves. Avi calls Ray and says he set up a meeting with him.

While at the office Lena receives a call from a woman, who says she is lonely. Lena tells her not to bother her at work.

Ezra calls Ray with a big problem and tells me to get there. ASAP.

After Ray leaves Abbey goes into his closet and grabs a ton of his clothes and donates them to St. Vincents.

Back in Boston Avi meets with the man who picked Mickey up from prison. The man rehashes what where he drove Mickey the day he got out of prison. The man shares he didn’t go to the cops and Avi encourages him to make it his business and go to the cops. Avi writes something on a piece of paper and he guys appears to agree.

Ray calls the doctor to see Terry. Mickey wants to know if he caused Terry’s problems by keeping him in boxing too long. The doctor asks to be alone with Terry where the two discuss his tattoo. Terry gets a little weirded out and she leaves. Ray talks to the doctor who calls Terry a stubborn bastard but that he will be ok. Ray again wants Bunchy to meet with the lawyer for his money. Mickey interrupts the two guys talking with a joke. Ray tells Mickey he killed the wrong priest, he killed the priests brother. Mickey doesn’t care. As Ray leaves Bunchy tells him that Mickey is going to go with him to get the money. Mickey makes a remark about supporting his kid that is what fathers are for.

At Ezra’s he freaks out about Ray’s father calling him three times. During their meeting Lee interrupts with the info on Ray’s neighbor and how the kid is a black Justin Bieber but Ray needs to buy the kid. Lee is psyched about it.

Mickey goes with Bunchy to his support group and tells an inappropriate joke about pedophiles. It is not funny and makes the room uncomfortable. Things get worse as Mickey continues to talk, he wants Bunchy to leave but he stays. Mickey tells the group all the priests should burn in hell for what they have done.

Lena calls Ray as he is on his way to Compton to see the kid singer’s mom. He has Lena investigate his neighbor.

While at Yoga Abbey looses it and starts crying and leaves in the middle of the class. Bridget calls Ray to talk as she is on her way home. She wants to know when he is coming home he tells her soon. As Bridget is walking the little neighbor singer, whose name is Marvin, pulls up in a golf cart the two chat and she goes with him to listen to music.

His visit to Marvin’s mom turns out to be an interesting one for Ray. She is intrigued by giving up her kid for money because of her addiction it looks like she is going to do it.

After her yoga meltdown Abbey goes to get Ray’s clothes that she donated.

Mickey goes to the library to watch some videos of ladies dancing. He calls Ezra to freak him out and only plays the music.

Bridget and Marvin talk about how Recon, the neighbor, is going to sell his story, his talent. Bridget talks about how her life is boring. Abbey comes home to find the two talking and is not happy since no one was home. Bridget defends him then asks if her parents are fighting. She mentions he doesn’t sleep there. Abbey giver her the it is business excuse.

Bunchy goes to get his check with Ray, who wants Bunchy to give him power of attorney over the money. Bunchy doesn’t sign the form. Ray wants to help but Bunchy doesn’t want it he can handle the 1.4 million. Bunchy thinks they owe their father. Ray admits he had someone beat up Daryl. Bunchy asks Ray point plank if he sent Mickey to prison, Ray avoids the question.

Back at the library Mickey meets an FBI guy who helped him get out of prison. The guy wants Mickey information from Mickey and pays him. Then tells him he will be in touch with his next assignment.

Avi tells Ray that the guy will ID Mickey as the shooter of the priest for $50,000. Ray tells him to set it up.

At Ezra’s party, Ray corners Recon and makes his demands, which are Marvin goes to school, no drugs and that no one messes with him. Ray then shares it is a done deal. After his meeting Ray finds Ezra who is having a difficult time as he reveals that Mickey called him. Ray just tells him to trust him.

Abbey arrives at the party and the two put on a happy face for appearances sake. Ezra gives a speech in honor of his wife Ruth but as he is giving the speech he goes off on a tangent about the price to be paid for the wrong that people do. Lee cuts the speech short by going up on stage and clapping.

Terry finds the doctor at a diner and makes it known he gave Ray the money for her visit. She tells him this is not how it is done, asking for a date. He walks away comes back and asks her if she likes spaghetti then walks away again. There seems to be a romance brewing.

Avi calls Ray to tell him the deal is done his father is going back to prison. The driver gave his statement implicating Mickey in the priest’s murder.

Mickey hires some ladies for Bunch and himself.

Ray takes Abbey home from the party and despite their anger with each other they end up having sex.

The FBI guy talking to Mickey has a wall full of pictures including one of Ray.