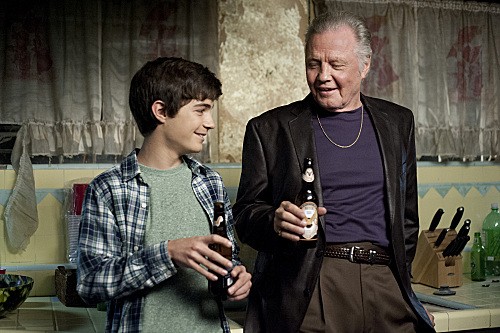 Tonight on Showtime their new drama RAY DONOVAN continues with a new episode called, “Housewarming.” On tonight’s show Ray and Avi learn some very unsettling news. Did you watch last week’s series fabulous episode? If you missed it you can read our full and detailed recap, right here.

On last week’s episode Ezra had an accident. Ray and Avi learned some very unsettling news.  Ray just did not understand why the murder investigation against Mickey was dropped and how he got out of prison five years early.  Ray was trying to find out what is up with that.   Mickey was out to intimidated Ezra Goodman and it looked like it was working when he asked Ezra what it felt like to send an innocent man to prison.  Ezra was frightened!

On tonight’s show Ray tries to shut down Van Miller’s investigation. Ezra wanders off.  Ray also settles the score with his estranged father Mickey, after learning that he put Ray’s children in danger.  Meanwhile a housewarming party to celebrate Bunchy’s new house got complete out of control and obviously Mickey was at the root of it.

Tonight’s episode 6 looks like it going to be great and you won’t want to miss it. So be sure to tune in for our live coverage of Showtimes’s Ray Donovan episode 6 — tonight at 10PM EST! While you wait for our recap check out the sneak peek video below of tonight’s episode!

The show begins with Ray walking on the docks and going up to Frank and throwing him in the water. Ray shows him a picture of Van and asks why the guy is meeting with his father. Frank doesn’t know and Ray orders him to find out or else. He tells Ray Van Miller works alone and if he thinks Van is after Ray he probably is. Ray tells him to shut it down but Frank says it doesn’t work that way.

Back at his house Conner tells the family Bunchy is having a house warming party. Ray is not pleased to hear Bunchy bought a house for his father. He tells Abbey, Bridget and Conner that he wants to know if Mickey calls any of them and they are not going to any party.

Alone Abbey questions Ray about where he has been. He says no one where but she wants to know why his pants are wet. They get in an argument when he won’t talk about business.

Ezra and Deb meet with a doctor about his brain tumor. The doctor wants to shrink the tumor. Ezra wants to talk to Ray.

Mickey and Bunchy move into the house but Bunchy is worried about how mad Ray is going to be. Mickey calls Abbey to help him and Bunchy decorate the house and make it nicer. She agrees to stop by after lunch and take a look.

Ray looks over photos of Mickey with Van when he gets a call that De’onte is with another call girl. Ray calls him and tells him to stop what he is doing. The girl removes the champagne bottle and ice bucket leaves it outside the room where someone comes to pick it up. Deb calls Ray to tell him an agitated Ezra is asking for him.

Avi sits next to Van at a coffee shop and manages to switch their coffees giving Van one with drugs in it.

The limo drivers takes the ice bucket from De’onte’s room back to the limo where Ray threatens him. He puts a knife to his throat and tells him that De’onte Brown is off limits.

Van is pulled over by the cops for going too slow. The cop can see there is something wrong with him and pulls Van out of the car. Van tries to explain he hasn’t been drinking but the cop makes him take a sobriety test anyway.

Abbey arrives at Mickey and Bunchy’s with a few items to help them with the house.

The cop drives Van back to his house and then calls Ray to tells him it is done.

Ray busts up De’onte’s fun. He tells him he needs to stop doing the drugs and sleeping with hooker or he is going to loose it all.

The drugs Avi gave Van make him hallucinate that toys are trying to kill him.

Back and Bunchy and Mickey’s Abbey cleans the place and makes it look real nice. She adds flowers some nice things. Bunchy is upset when she says they are not coming to the party because it is movie night.

Avi and Ray head t Van’s place and find him hiding under the desk. Ray asks him about the toys. Ray plays him the sobriety test given to him by the cop then asks him why he is talking to Mickey. When Van says he isn’t Avi starts to man handle him. Ray tells him that he isn’t the first to shut them down. Then tells him there is no case as Avi sticks him with a needle full of something. Ray orders Van to call him when he comes down.

Bunchy and Abbey talk. She tells him how they all want to go to the party but can’t because of Mickey. Bunchy is upset he is getting punished. He asks Abbey if Ray blames Mickey for Bunchy being molested. Then he talks about how Terry broke the priests hand when he tried to molest Terry. Bunchy cries wondering why he didn’t try to stop the priest. Abbey consoles him.

Bridget and Marvin are caught making out by Conner. Marvin says they should go to the party anyway because neither Abbey or Ray are home.

Ezra leaves the hospital and wonders around. Ray finds him on the street holding a dog. Ezra says there used to be a pet store there. Ezra revealed he left so much to Ruth but not Deb. He admits he is scared. Ray assures him it is going to be ok.

Bunchy tells Mickey no one is coming to the party. Mickey pulls out a drink and Bunchy asks for one when Mickey won’t give it to him, Bunchy pours it himself. Mickey invites some women over for the party. Terry invites Francis, who shows up but doesn’t ask her about her family.

In the hospital Ezra prepares for surgery as Ray waits with him. Ezra promises Ray he won’t tell them anything as he leaves for surgery.

Bridget and Conner go with Marvin to the party, despite Ray telling them not too. Bunchy is really happy to see them. Marvin and Francis dance when Terry and Bridget don’t want to. Mickey gives Conner beer.

A sober Van calls Ray and tells him to go f%$#k himself. Abbey arrives at the hospital, as Deb gets worried it has gone on too long.

Mickey, Bunchy and the hookers do some coke and continue to drink but before Bunchy and one of the ladies head off together. Conner in a different room gets high. As the girl is going down on Bunchy he has a flashback of the priest and freaks out. The hooker leaves and Bunchy cries. After that Bunchy continues to get drunk then sets fire to the wall with memorabilia of the school/church where he was molested. He comes downs and tells everyone to get out.

Bridget and Terry talk about Francis and Marvin. After the fire incident with Bunchy, Terry calls Ray to tell him what happened, including the kids being there. Ray orders Conner in the car as Mickey and Terry tell him to calm down. Ray grabs a gun and goes right for Mickey aiming it at his head. Mickey tells him he doesn’t have the balls Ray smacks him instead. Conner comes out of the car to help Mickey. Bridget and Marvin emerge. Marvin bolts while Bridget and Conner beg Ray to not shoot Mickey. Ray gets upset with the kids scaring them. Terry tells Ray to calm down and that he will take the kids home. Bridget and Conner run to Terry when Ray leaves.

Ezra wakes up from surgery happy to be alive. Ray is there and Ezra can tell he is upset. Ezra wants to know what is wrong. Ray says his father. Ezra tells Ray he will handle it and Ray says he won’t that it is over and Mickey is working with the FBI. Ezra then tells Ray they have to kill Mickey. Ray replies it is not that simple ‘he is still my father”. Ezra asks Ray who hates Mickey more then they do.