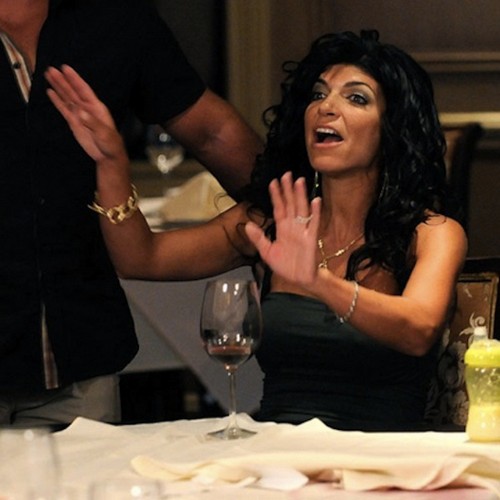 This episode of Real Housewives of New Jersey is titled On Thin Giud-ice. It is the ninth episode in season five. Previously Dr. V told Poison Joe Gorga he feels his sister Teresa Giudice’s actions stem from her feeling protective over him. She always looked out for her little brother, and maybe she feels Poison did not pick a suitable spouse. Dr. V. is not excusing Teresa’s actions. She is just trying to think of what would motivate Teresa to go after his wife.

The work with Dr. V continues with Poison’s wife Melissa (I want to be J-Lo. Do you like my plastic surgery? Don’t I look like her?) Gorga and Teresa’s husband Juicy Joe Giudice joining the conversation. Everyone is very candid but they are talking calmly instead of arguing. Dr. V. is trying to get to the root of the cause of the brawl. The good doctor asks Juicy if he feels he is dragged into the drama, and perhaps over reacts to the situation. Juicy says yes. I think Joe can be a great guy but this brawl was an excuse to beat the crap out of his brother in law. Dr. V. herself does not hold back when making her point. She calls Teresa a dumbass for not sticking up for Melissa at the dinner with Kim D. Melissa and Teresa hug it out, making Dr. V. and Poison smile. Teresa finally admits that she did some wrong things. Poison exhaled from relief. Later Rich and Kathy Wakile will join the conversation. Caroline Manzo says in her talking head she came to Lake George to help someone in crisis. What she didn’t find was someone in crisis because Dr. V. was there to help.

Although the family is making progress working out their issues there is still a lot of tension between everyone. Kathy Wakilie’s sister Rosie Pierri is talking out side with the Joes when Poison says to Juicy “There are some days when you’re f***ing great and some days when you are a dick”. Juicy’s retort is “What are you going to do? Start f***ing crying again?” Rosie in her talking head says she is still nervous that things could blow up up again. I can’t blame her. Just as Teresa may be protecting her little brother Poison’s anger issues with Juicy probably stem from wanting to be protective of his sister. A few weeks ago Poison confronted Teresa in the gym regarding her husband. Poison mentioned the couple’s bankrupcy, Juicy’s alleged infidelity and the fact that Teresa was refered to as a c**t by her husband on national television. The Joes used to be close friends but when things like this happened Poison built up a lot of anger towards Juicy.

Dinner was a good family bonding time. Teresa tells everyone her daughter Gia is discovering boys and going through puberty. She even addresses Poison himself to tell him about his God Daughter. They all look relaxed and genuinely happy to be together.

At the end of the episode Rosie calls the family into the living room. Everyone is a little tipsy but laughing and smiling. She wants to do a trust exercise where you fall backwards and someone catches you. Rich caught Rosie (he accidentally grabbed her breasts, then he ran with it and felt her up) and J-Lo Light caught Juicy. Teresa decided she wanted to catch Caroline. What she didn’t expect, though, were the words that came out of Caroline’s mouth. Caroline said she wanted to make a deal. Teresa could catch her if she promised to do the same with Jacqueline. Teresa stops cold. You can see the hurt in her eyes at the very mention of Jacqueline Laurita’s name. Caroline says in her talking head the reason she wanted to make this deal was to catch Teresa off guard. This is the only way to see the real Teresa. Jacqueline’s name had not been spoken since the beginning hours of the retreat. Everyone said to her this weekend is about us, not her. Teresa really didn’t want to make the deal, but Caroline chimes in that she needs to make amends with Jacqueline as well. Reluctantly Teresa agrees to the deal. She catches Caroline. This is the end of the game because everyone wants to go to bed.

Teresa does not follow everyone upstairs. She asks Juicy to sit on the love seat with her. Teresa wants to talk about the promise she made to Caroline. She is crying as she tells Juicy she doesn’t know how she is going to make amends with Jacqueline. Juicy says something heartfelt instead of bad mouthing Jacqueline. He tells her she needs to make up with Jacqueline. Teresa starts to protest but Juicy keeps at it. He said it’s time for the fighting to end. Tersesa doesn’t say anything but she is still crying. I think she realizes Joe is right.

There are a few light-hearted moments to round out the excruciating drama. Caroline, Rich and Kathy have a snowball fight. Juicy has a little fun with Rosie, asking her what is her type of woman she finds attractive. Rosie says likes tall girls tall and thin with dark features. The cousins get on the internet to look for lesbian porn. Juicy wants Rosie to show him who she finds attractive. They critique the video vixens over a glass of wine and have a good laugh over what they are seeing. I love seeing Juicy and Rosie together. They were always good friends.

Jacqueline and Chris Laurita make a small appearance, too. They are out to dinner talking about their son C.J. discovering masturbation. The conversation is gross and not necessary to the episode’s story line. Chris is wondering how everyone is doing in Lake George but Jacqueline could care less. She goes on and on about how she doesn’t want Teresa in her life anymore. Jacqueline is in denial. If she really didn’t care about re-building her relationship with Teresa she would not talk about it. I think Bravo included the Laurita’s in this episode because they are contractually obligated to show the entire cast in every episode. The Laurita’s are not involved in the family retreat therefore Bravo had to find some way to include them.

I’m glad this Hatfield and McCoy feuding is starting to die down, even if only baby steps have been accomplished. It’s draining watching a once loving family engage in nuclear fights. To add insult to injury some of the housewife are still taking jabs at each other in their blogs.

Teresa and Melissa recount the events of the episode in their Bravo blogs but also find out what the other said behind their backs. J-Lo Light thinks Teresa made up with her publicly but her sister-in-law really doesn’t mean anything she said or did. Well, Melissa is guilty of back stabbing Teresa. In the last episode she belittled Teresa’s growing empire of products and cook books. Teresa usually doesn’t get mean in her blogs but the past couple of weeks she has really let her anger be known. I guess Melissa has never heard of Karma. JLo-Light better watch out. She is crucified weekly by Tre-Huggers making comments to her and Teresa’s Bravo blogs.

Now Wet Paint is reporting Teresa’s friend Heather Mclean is outraged over Melissa dissing her mother-in-law. JLo-Light wrote “Now I know that while we were crying, devastated, and embarrassed over in the other room, nothing but giggles and Fabellini toasts. The Giudices must have felt like what just happened was no big deal. They were having sexy time in the hot tub. Hey, whatever floats your boat. I wonder what Filomena “too much boobie” Giudice would say about her son and daughter-in-law’s Jacuzzi action and his “I’m going to jerk off”?”

Per Wet Paint Teresa tried to talk to Melissa about her blog post but Melissa refused to talk with her. Heather was just as outraged as Teresa and decided to do something about it. She took to Twitter to call out Melissa. Heather tweeted “I was with Teresa when she immediately called & then texted Melissa to ask why she did it, to directly communicate & work it out privately.To list her full name like that, mocking her in public, someone who gave her such hospitality, a respected elder, is really incomprehensible.” Go Team Teresa!

We have to remember we are seeing what Bravo wants us to see. It’s easy to twist things around. For example, Radar Online posted a story about Melissa taking boxing lessons. The website insinuates JLo-Light is taking the lessons so she can go a round with Teresa. Ugh. Melissa is very into fitness so she is probably taking boxing lessons for exercise. How else is she going to get those J-Lo abs?