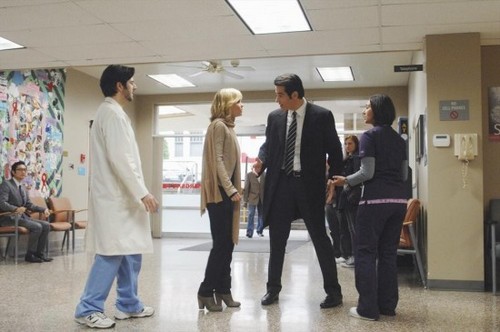 Tonight on ABC their new family drama series RED WIDOW airs with a new episode called, “The Coke.” On tonight’s show Gabriel takes dangerous matters into his own hands, and Kat and Ramos rekindle their illicit relationship. Did you watch last week’s episode? We did and we recapped it here for you.

On tonight’s show Marta discovers the painful truth about the identity of Natalie’s kidnapper and learns a compelling new piece of information about her husband’s murder. Meanwhile, Gabriel takes dangerous matters into his own hands, and Kat and Ramos rekindle their illicit relationship.

Tonight’s episode 4 is going to be exciting, and you won’t want to miss it. So be sure to tune in for our live coverage of the season 1 episode 7 of Red Widow — tonight at 10PM EST! While you wait for our recap, check out a sneak peek of tonight’s episode below!

Marta doesn’t have time to get the drugs out of the Marina. Schiller has brought Alexandria to marina in order to reassure. The drugs that were stolen were supposed to have been bought by her. Schiller is willing to keep Marta’s secret as long as business continues.

Gabriel has a heart to heart with his grandfather. Grandpa assures him how proud he is but what happened (beating up Mike) isn’t really Women’s business. He shouldn’t tell his mother.

Irwin has decided sleeping with his dad’s girlfriend is a good idea. He reveals to her how he still has grand aspirations with his drug business.

Natalie makes a surprise visit to “Uncle” Mike. Mike’s wife warns her that she shouldn’t be there and that Mike isn’t her uncle but Natalie simply replies that she’ll back to visit.

The FBI agent, James Ramos, is back to harassing Marta. However she has leverage over him that she’s not afraid to use. She goes back to her boat to get finally get the drugs. What does she find? Someone has already beaten her to it.

Marta questions Gabriel about what happened to the drugs. Gabriel tells her that Irwin is handling it.

Grandpa finds out what Irwin did and warns Marta that her idiot brother will still try to the drugs. This entire conversation is overhead by his little lady. But Luther is starting to get suspicious about her.

Marta goes in for her apartment with Schiller and finds his father instead. The father thinks Marta is making his son weak so he pulls out a gun. They fight over the guy and no one gets hurt. But the dad does have a heart attack. Marta does get him to the hospital in time and weirdly this brings Schiller and her closer together.

Grandpa’s girlfriend, Felicity, reveals to Marta where Irwin is going to with the drugs. She rushes to the scene and manages to crash her way in to getting the drugs back from the buyer.

Marta and her sister Kat try figure out a way to deal with the drugs. Although when Marta returns to the hospital, she finds out that Schiller already checked out his dad. Nevertheless she does run into Dina. Dina wants her old friend back but Marta can’t let herself to comfort her friend at the moment.

Irwin is in trouble. He may have made promises to certain people without any way to back it up.

Marta finds out Schiller went to her house from Natalie. She’s so upset she goes to find Luther at her Dad’s. She finds her son there. After getting rid of him, she then deals with the other surprise, Alexandria. Her dad wants to team up with Alexandria to take down Schiller.

Marta meets with Schiller at his place. They’re talking amicably when Schiller informs her that their name isn’t really Schiller. Just the name his father took after he first killed the real Schiller. As a thank you for helping his dad, he gives her a necklace she can cash in.

Natalie goes to Marta and reveals that she goes to see Mike. She asks Marta to go see him as well because Mike has something to tell her. When Marta does go to Mike and finds out some hard truths. She now knows Irwin was the one to rip off Schiller. He also involved her son in beating up Mike.

Kat goes to Agent Ramos to apologize. She feels bad that her sister is blackmailing him with their kiss. Still, she works her way into finding out that Ramos’s wife is in rehab. Kat’s husband just so happens to be estranged.

Marta confronts her brother. When he tries to deny it, she pulls out a gun and shoots his hand. After that incentive, he finally admits the truth. She then looks him in the eye and disowns him. She goes down to the pier and informs her dad that the deal is off. She tells him the drugs are gone. After hanging up she then gets rid of the coke by dumping it off the pier.

When she returns home, she talks to her son. She tells him how he made her ashamed in front of the man that kidnapped her daughter.

Schiller’s dad wakes up and warns him about Marta. Unfortunately he warns his son that Marta is working with the Nazis. Schiller calms his dad before he’s interrupted by the same man that was threatening Irwin earlier.

Marta goes to Dina at the hospital. She gives her the necklace in order to wipe out Mike’s debt. Their friendship may go back on track.

Marta goes to Schiller. He confronts her with her brother’s crime and demands the drugs back. Marta tells him she dumped it. He tells her to get out. What little trust that was there may be gone.

Irwin and Felicity are together when shots are fired. Irwin ends p unscathed but Felicity was shot and she’s bleeding badly. Could Irwin have taken her to hospital? Possibly, but he chooses to drive off and leave her there.

Natalie is on edge when her brother finds her. She wants to know what they should do after Mike told her about Schiller.

Alexandria goes to Schiller. She tells him how she knows he was protecting Marta from her. She manages to leave out her almost treason before they go at it.

Gabriel is arming himself now.

Kat and Ramos aren’t looking like their done just yet.

Luther finds Felicity’s body and brings her to Grandpa. He thinks Felicity’s death is retaliation over not bringing the coke. But Marta and Luther figure out that Schiller had put out a hit on Irwin. Yet they won’t tell her father. Schiller’s man that died just happens to have a mark on his shoe.

Marta believes now she has to kill Schiller. But will she go through with it. We’ll just have to wait and see. For once the promos aren’t giving it away.