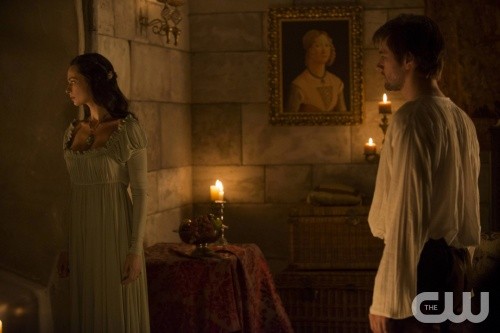 Tonight on the CW their new drama REIGN airs with a new episode called, “Chosen.”  On tonight’s show the heretics threaten Mary and Bash fights to uncover the truth. Did you watch last week’s episode? We did and we recapped it right here for you.

On last week’s show when Olivia, who is an ex-lover of Francis’, arrives at the castle, she brings the dangers of the woods with her. Mary (Adelaide Kane) seeks comfort in Bash (Torrance Coombs). Bash is threatened by heretics for interfering with a sacred blood rite. Meanwhile, Aylee is forced to spy on Mary when Queen Catherine blackmails her. Alan Van Sprang, Anna Popplewell, Celina Sinden and Caitlin Stasey also star. Bruce McDonald directed the episode written by Jennie Snyder Urman.

On tonight’s show an attempt to scare Mary (Adelaide Kane) causes Queen Catherine (Megan Follows) to take drastic measures to make sure the guilty party is caught. Francis (Toby Regbo), aware of Bash and Mary’s growing attraction, turns to Olivia (guest star Yael Grobglas). Bash ventures into the woods to pay his debt — the human sacrifice the pagans demand — and returns with blood on his hands. Meanwhile, Kenna (Caitlin Stasey) comes clean with the girls about her affair with the King (Alan Van Sprang), to a mixed response. Jenessa Grant, Anna Popplewell and Celina Sinden also star. Bradley Walsh directed the episode written by Wendy Riss (#106).

Reign Season 1 episode 6 “Chosen” airs at 9PM tonight on the CW and we will be blogging it will all the up-to-the-minutes. So come back to this spot and spend the evening with us enjoying the show! Make sure to refresh often to get the most current update!

Sebastian had to choose someone to sacrifice to the pagans and when he didn’t – they chose for him. They picked Queen Mary to be their sacrificial lamb. They let her know by managing to put a necklace right on her pillow while she was sleeping.

She knows it wasn’t Francis. After all she knows Francis is angry at her and doesn’t know why. She assumes it was because she acted like a jealous wife when his former lover returned to court. Olivia did rile her up with all her innuendos but she shouldn’t have given in. With all of that going on she thought Sebastian must have been the one to leave the necklace. She asks him as they all begin to crowd. He says it wasn’t him although he does recognize the symbol.

Good King Henry is back from his sojourn or to better describe it: his break-up with his leading mistress, Diane. For a welcoming home, the entire court has gathered outside. Kenna, his current and younger mistress, is all excited to finally take her place at his side when she among the rest of the crowd seem him embark from the carriage with Diane. Mary helps cover up her embarrassment. Kenna was going to him when she spotted Diane.

Sebastian pulled Mary and Francis alone to a meeting. He had to tell them what the necklace meant. Now that Francis knows Mary is being targeted he issues more body guards for her. Yet it was the way he issued his command that alerts Sebastian into wondering why his brother is so angry. Francis says there are too many secrets between them. A part of him refuses to say what truly is bothering him out loud. He can’t say he saw Mary in Bash’s arms.

Kenna confronted the king. She barges into his chamber to demand why Diane is back. He comforts her with the why. He did break it off with Diane but her house is going under renovations and so he invited her back to court to wait it out. She is the mother of his son. He couldn’t leave her in such conditions. Kenna just has to be patient.

In the meantime she can show off to her friends. She invited them to dine in the King’s chambers. They’re surprised and a little apprehensive. Lola points out to her that Diane has become a fixture at court. Just look at the stones laid into the floor. It’s the letter H and D wrapped around each other to represent the King and Diane’s love for each other.

Bash has a former pagan to help him understand this sacrifice practice. His mother used to be a part of the pagans in the woods. She left once they began to change their ideology. Because of her involvement, the pagans might even count Bash as one of them. She warns her son though. Mary belongs to Francis at whose will; he’ll eventually be allowed to stay at court. He shouldn’t forget that.

Kenna demanded the King to remove all the tiles that has his and Diane’s initials. He wouldn’t. He thought it was too much of a bother. Kenna was so infuriated that the king thought of another way to appease her. He sets off fireworks in her honor. The light show spells out her name for all the court to see.

A bleeding moose head was hung over Mary’s bed. Her screams alerted everyone to the danger. No one knows how the pagans were able to get so close to Mary. Queen Catherine deciphers it. She smelled poppy seed in Mary’s wine. The Queen hasn’t been a friend to Mary in a long time but she won’t have people thinking vagrants could come into the castle and threatened whoever they choose. Both women call in the staff. They promise to protect them if they were to reveal who the traitor in the castle is. No one steps forward leaving the Queen to stop being nice. Mary was good cop and Catherine is bad cop. If the servants don’t reveal whose threatening them then she will burn down their villages out of spite.

An informant did come forward. With her help the Queen realized her main guard was the one to hang the stag’s head. But he was outside the door when the maid began talking. By time the Queen realized it was him, he made a run for it.

There was a second traitor in the castle. Mary’s maid was the one to place the necklace. The iron it was made out of left a rash on both their hands. Grasping what the maid has done, she called for the guards. They quickly arrested the no longer sweet Sarah.

Bash used his influence and money to pay for a prisoner out of the dungeon. Francis knows she’s going to use the prisoner as a sacrifice. He told Mary Bash’s plan. She was horrified and it came to her why the pagans would have thought she was important to Bash. She was going to tell Francis when he stops her. He admits he saw her with his brother. It’s why he was angry. After all he told her about putting their position first and thinking things through; she ignored him. That’s why his brother is forced into killing someone.

Bash took his prisoner to the Blood Wood. He didn’t want to kill the man. It’s why he killed one of the pagans instead. He was walking taking the prisoner back to the castle when the foolish man admitted he heard him fight with the pagan. He knows Diane was once a pagan. Bash had to kill him. He couldn’t let any stories about his mother float around.

Bash doesn’t reveal what really happened to Francis and Mary. He only tells them the debt has been paid. Francis is relieved but he lets them know. Nothing can ever happen between them again. He shouldn’t have let his feelings come into this. He may not marry Mary in the end. So for the time being she can spend her time with others and so will he (like with Olivia). Only Bash is off limits and because he will be king, Bash shouldn’t take what he said as a request.

Bash took the threat to his life seriously. He went to his mother and told her they aren’t safe here anymore. His mother promises he will be remembered. She won’t allow anyone to forget her son. Maybe she’ll use her wiles on the king. He did remove the tile s for Kenna. Afterwards he needed someone uncomplicated to cheer him. Who better than Diane. The woman that never made demands.

Sarah and the guard were set to be burned at the stake but Mary wanted a quicker death for her maid. The girl was shot with an arrow to spare her any further suffering.