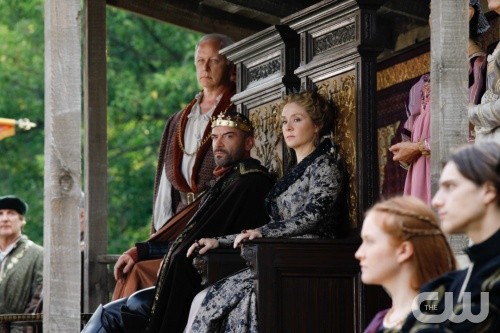 Tonight on the CW their new drama REIGN airs with a new episode called, “Hearts and Minds.”  If you never watched the show hidden between the lines of the history books is the story of Mary Stuart, the young woman the world would come to know as Mary, Queen of Scots. The teenage Mary is already a headstrong monarch ─ beautiful, passionate and poised at the very beginning of her tumultuous rise to power.

Arriving in France with four close friends as her ladies-in-waiting, Mary has been sent to secure Scotland’s strategic alliance by formalizing her arranged engagement to the French king’s dashing son, Prince Francis. But the match isn’t signed and sealed, it depends more on politics, religion and secret agendas than affairs of the heart. Prince Francis is intrigued by the fiery Scot, but like most young men, he resists the idea of settling down into marriage, especially when he has a history with a lady of the court and his own point of view on the wisdom of an alliance with Scotland. Still, an attraction between Mary and Francis is ignited.

On tonight’s show Mary has to decide if she is willing to lie and sentence a man to death in order to have King Henry let her out of her engagement to Prince Francis.

Reign Season 1 episode 4 “Hearts and Minds” airs at 9PM tonight on the CW and we will be blogging it will all the up-to-the-minutes. So come back to this spot and spend the evening with us enjoying the show! Make sure to refresh often to get the most current update!

The episode opens with an archery contest between Prince Francis and Thomas (of Portugal). The Queen, King, Nostradamus, and Mary and her ladies in waiting are watching the competition intently. Francis and Thomas are taking the competition very seriously, Mary watches them bicker uncomfortably. While Mary and her ladies discuss her engagement to Thomas, Kenna steals glances of King Henry. Mary reminds them that her engagement to Thomas is supposed to be a secret until she is “released” from her engagement to Prince Francis.

Mary’s Uncle arrives and she leaves the archery competition to speak to him. Her Uncle informs her that King Henry still hasn’t released her from her engagement with his son. They have been discussing the matter for days, and are still coming to agreement on a new treaty between Scotland and France. Mary says she will not beg King Henry to release her, but her Uncle informs her she will have to beg him because it is what is best for her country.

Nostradamus is caring for Bash, who is still recovering from the wound he received when he was attacked by the English. Lola arrives and he tells her that Bash’s wound is closing, but the disease in his blood is spreading, and if his fever doesn’t break tonight he will die. Bash is awake, and not impressed with his diagnosis. Lola sits with him, despite Nostradamus’s orders that Bash needs rest. Bash says that when he looks at Lola he “feels better” and when he has to look at Nostradamus he “feels worse.” Nostradamus leaves the two alone, and Lola reads to Bash out of his book of Greek Mythology.

A man in a robe whispers something in King Henry’s ear. The crowd starts buzzing because it was obviously bad news. The King’s men grab a man out of the crowd. The King accuses him of being a spy for England, and for warning England that Bash was coming and nearly killing him. The English man denies being a spy, he says he is a Diplomat and he is just in France to keep the peace. King Henry doesn’t buy his explanation, he says he is going to send the Queen of England his head, and orders his men to take him away.

Mary finally gets to see the King, she bows in front of him and then asks him what she can do for France to release her. King Henry tells her that he wants to execute the Diplomat that caused Bash’s attack, but in order to do so he needs solid testimony that he is indeed a spy. The only witness he has to prove the Diplomat is a spy, is a prostitute. The prostitute’s testimony is an unreliable source and not a valid reason to execute the Diplomat. He wants Mary to lie and say she witnessed the Diplomat spying, since her word is more honorable than the prostitute, and then they can execute him with just cause. If Mary agrees to lie and say the Diplomat is indeed a spy, then the King will release her and she can marry Thomas. Mary agrees to the sign her name to the prostitute’s statement in exchange for her freedom.

Mary returns to her room and begins packing for Portugal, she tells her friends she is leaving with Thomas in two days. Her ladies in waiting (Greer, Lola, Kenna, and Aylee) are upset that she is leaving without them. Mary says she didn’t think they would want to go, seeing as how they came with her to live in France, not Portugal. Her friends tell her they are coming with her to Portugal.

Prince Francis is practicing his archery and Mary pays his a visit. They are both upset that they have to cancel their engagement, since they had been planning on marrying each other since they were six. They agree to meet later at the lakeside. A man was hiding around the corner listening to their conversation, he reports everything to he learned to Thomas.

Kenna sneaks in to see King Henry. She tells him she is supposed to leave in two days, but she wants to stay and be appointed as his Mistress. The King reminds her he already has a Mistress, Diane.

Mary meets up with Prince Francis at the lakeside like they had planned. Francis tells Mary that he doesn’t trust Thomas and he has heard rumors that he is scheming and cruel. Mary ensures him that she will be safe in Portugal with Thomas.

Mary returns to her room, and Thomas is there waiting for her. He says he has come to share his rules with her, and how she will be expected to conduct herself once they are in Portugal. He says the man with him is now her “whipping boy”. He smacks him in the face and says that was because Mary questioned him. Basically every time Mary is disobedient or breaks a rule, her “whipping boy” gets smacked for it. Thomas tells her she is no longer free to do as she wishes, and threatens to pull his Portuguese ships from her country if she doesn’t follow his rules of engagement. Thomas leaves and Aylee begs Mary not to marry him, Mary says she has no other option.

Bash, Lola, and Fancis are outside preparing for the costume banquet. Bash says that if he hadn’t been ambushed getting men to Scotland, Mary and Thomas would have never gotten engaged. Bash and Francis realize that Thomas was behind the ambush, not the English Diplomat. Thomas made sure France’s troops didn’t get to Scotland so that Mary would need him and his Portuguese army.

The Diplomat Simon is chained to a chair at the costume banquet, waiting to be executed. Mary is speaking to him when Thomas enters and interrupts. He threatens to get her “whipping boy.” Bash and Prince Francis arrive at the party and Francis approaches Thomas. Francis tells Thomas that he knows that he came to France in search of a wife, and had his brother and men ambushed so that Mary would marry him. Thomas storms out. Mary and Francis devise a plan to get proof of Thomas’s ambush and stop the execution of innocent Simon.

Mary finds the prostitute that lied and said Simon was a spy. The prostitute admitted that she lied, and Mary drags her back to the castle to tell the King.

Bash and Francis chase down Thomas and the “whipping boy,” Miguel in the woods. Thomas is about to kill Miguel so that he can’t rat him out for the ambush, but Bash and Francis arrive just in time and stop him. A battle ensues, Miguel and Bash are injured, and Francis kills Thomas. They rush back to the castle to stop the execution of Simon.

They arrive at the execution with two witnesses, Miguel and the prostitute, and Thomas’s dead body. Simon is saved, he thanks Mary for saving him.

Mary and Francis’s engagement treaty is reinstated. King Henry spends the night with Kenna. And, the episode closes with someone hiding under Mary’s bed, wearing a mask, while she sleeps.