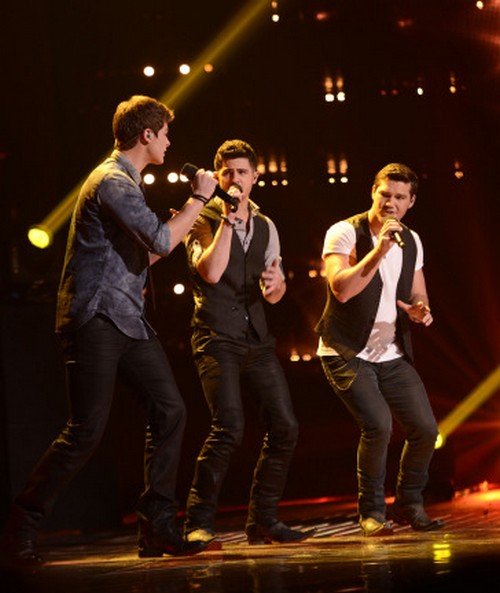 Restless Road took the stage on THE X FACTOR USA for their Top 8 live performance and Big Band Week.  Restless Road sang “Life is a Highway”  by Rascal Flatts. On tonight’s show the top 8 performed live in front of coaches Simon Cowell, Kelly Rowland, Demi Lovato and Paulina Rubio for America’s vote and to make it to the coveted “Top 6.”  Did you watch tonight’s performance show? We did and we recapped it here for you.

Judges’ comments: Restless Road singing “Life Is A Highway” By Rascal Flatts – Kelly said, “I will definitely say you guys worked hard this week and everything came together.”  Demi said, “You guys did very well and you guys look like stars up there – this is probably my favorite performance from you.”  Paulina:  “You guys, I love you guys.  I can feel the relationship outside the stage on the stage.  You guys did much better than last week.  There is nothing more sexy than a country song.”  Simon said, “You girls  are in happy mood thank goodness, Great song choice you did great this week.  I worried about the song.  You made the song work.  I like the way you look.”

If you want to see Restless Road make it another week, you have to vote for them.  Restless Road took to their twitter to ask their fans to support them tonight, “There’s going to be a double elimination that’s why it’s extra important that y’all vote tonight! WE CAN DO THIS!!! :)”