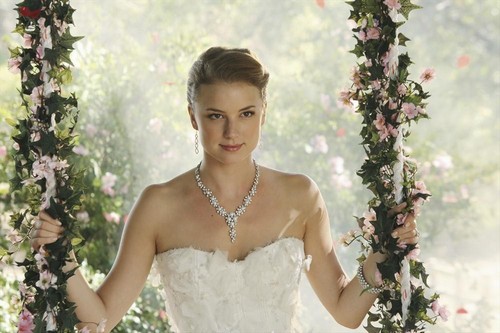 Tonight on ABC after a one week hiatus the hit drama REVENGE continues with a new episode called, “Surrender.” On tonight’s show as true intentions are revealed, dark secrets come to light.  Did you watch the last episode season 3 episode 8?  If you want to catch up we did and we recapped it here for you!

On last week’s show Victoria eagerly threw Emily a bridal shower that neither of them will soon forget. And when Daniel grew more distant, Emily had to take drastic measures.  “Secrecy” was written by Sallie Patrick & JaSheika James, and directed by Colin Bucksey.

On tonight’s show as the wedding of the century quickly approaches, Emily puts the finishing touches on her final takedown. But the tighter Emily holds the Graysons in her grasp, the more they slip through her fingers.  This episode was written by Joe Fazzio, and directed by Jennifer Getzinger.

Tonight’s Revenge season 3 episode 9 is going to be exciting, and you won’t want to miss. So be sure to tune in for our live coverage of Revenge — tonight at 9 PM EST!  While you wait for our recap, hit the comments and let us know how excited you are about the new season of the Revenge? Check out a sneak peek video of tonight’s episode below.

Emily and Daniel’s wedding is going ahead but their little secret remains just that…a secret. Daniel says he doesn’t want to overshadow their big day. Emily is fine with that. They have enough o deal with. They have to be the perfect couple for Margot’s feature on their wedding. That means interview and press calls. However will her morning sickness handle such a heavy workload?

Daniel has Sarah meet him at his office. He hasn’t told her about the baby. All she knows is that Daniel has had a week and all he’s done is nothing. She sees the photos from their feature and wonders if he’s ever going to call off the wedding. He says he hasn’t talked to Emily yet because his magazine needs the story. She’s not buying that anymore. He either comes clean or they’re over. She won’t be the other woman.

Emily sense Daniel pulling away. Nolan and Aiden tell her to drop the baby bomb. Yet she can’t. Daniel would know it was her and she worked really hard to regain his trust. All she has to do is keep in act like everything is ok. Even meeting up with Victoria to discuss seating charts to follow through with her plan. The two women are exchanging barbs when they notice Victoria’s clothes falling from out of her room. They go up to investigate and find Lydia.

Lydia was told by Margot to remain in the shadows until the big reveal. Lydia didn’t like the idea. She wanted to scare Victoria instead. Emily is excuse after hearing Victoria saved Lydia when she was advised to get off the plane. They had a deal. They were both supposed to disappear. Lydia hated to watch from the background as Victoria went back to her life to reclaim her status. Lydia after all love status. It’s why she almost married Conrad.

Later when Lydia is leaving she runs into Daniel. Emily called him and he had to see it to believe it. She waves him off and just as she’s about to leave, Emily goes over to talk to her. Emily provokes her just enough to get pushed off a couple of steps leading Daniel to come over and worry about her. He has to his mother about the baby when Victoria tried to tell him to stop fussing. The secret is out and Emily has gotten her way.

Victoria knows Emily planned the “baby”. Convenient timing with Sarah being back in the picture that’s for sure. As for Sarah she went to Charlotte to cut ties when Daniel’s sister revealed her real plans. She wants Sarah to replace Emily and she’s going to see that the wedding gets cancelled. She meets with her brother on his daily run for a talk. She wanted to convince him to call off the wedding and doesn’t understand why he won’t listen.

Charlotte doesn’t know about the baby yet. Conrad on the other hand is happy about the baby. Victoria told him but she left out the Lydia part.

The baby new got leaked and naturally Emily blamed Victoria They swarmed on by the paparazzi and Daniel is angry with the intrusion. He confronts his mother on her big mouth. She denies it and says it must have been Emily. Emily must have felt threatened after she told her about Sarah. Daniel lays into her not believing all that’s she’s done. He makes himself clear. She’s needs to stop or she’ll lose him for good.

Charlotte learned about the baby from the media. She went over to Emily’s to verify. Afterwards she wanted to make amends. She said she hasn’t been a very good maid of honor (understatement). So she treats Emily to a day of pampering to make up for it. Not that Emily enjoys her day fully at the spa. She has to start planting evidence against Victoria for a double murder.

Lydia no longer wants to help Margot from bringing down Conrad. She had enough to put him away and chose not to. She breaks their partnership in order to go back to Conrad. She wants to take up where they left off. But what will she do with the incriminating recording of him?

Everyone appears to be giving up on their secret agendas. Daniel gave up Sarah and Charlotte went to her mother to say that both should stop meddling. Will there be peace?

Aiden surprises Emily with candles. He set up the scene to be perfect for his plans. He wanted to propose to her and after a heartfelt speech actually does. This time she’s happy (for more than revenge) when she says.

Nolan went to Margot against Jack’s wishes. All he should have done was sabotage her story on Conrad. What he did was he got to her and told her that if she wanted a story then she should ask Jack directly. When she does she hears how he lost two people already to Conrad. Jack then goes on to say if she does the story, she’ll be putting her life on the line. She’s willing to drop it but not for her. For him.

The Emily and Daniel wedding is tomorrow and Daniel wondered why Emily never asked him about Sarah. They talk and things appear to be ok, only for Emily’s plans to get destroyed by Victoria. Victoria is refusing to go to the wedding.

Lydia found some old dirt on Emily to ruin things as well. She found the photo of Emily in the background during that infamous New Year’s party.