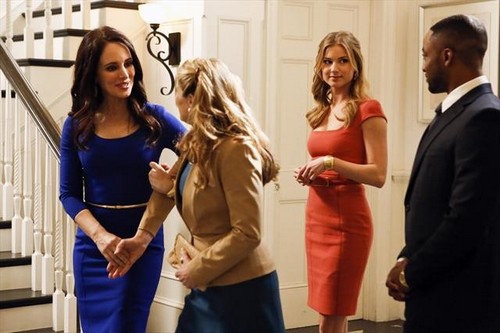 Tonight on ABC REVENGE returns with a whole new episode called “Illumination.” On tonight’s show the Graysons get another target on their backs, and this time it’s from an unassuming source.  Did you watch last week’s show? We did and we recapped it here for you!

On last week’s show still reeling from the devastation on The Amanda, Emily’s commitment to justice and revenge was stronger than ever, while the Hamptons mourned the loss of one of their own.

On tonight’s show the queen and king of smoke and mirrors, Victoria and Conrad, make a calculated move, starting a charitable foundation in the late Amanda Clarke’s name. But little do they know that Jack is not buying it and has a plan of his own. Meanwhile, Emily’s past catches up to her again.

Tonight’s Revenge episode 16 is going to be exciting, and you won’t want to miss. So be sure to tune in for our live coverage of Revenge — tonight at 9PM EST! While you wait for our recap, hit the comments and let us know how excited you are about the new season of the Revenge? Check out a Sneak peek video of tonight’s episode below!

Tonight’s episode starts with an upset Emily talking to Aiden. She tells him that her foster brother showed up at Amanda’s funeral and she left early. She set a fire as a young kid and it separated her from the brother that protected her. Meanwhile Jack talks to an insurance adjustor that helps him put a plan into place. He is going to set up another life insurance policy just for his son, in case something happened to him.

Victoria also lets Jack know that she and Grayson want to set up a charity in her name. Emily tells Victoria that she would like to help. As they’re talking, Eli James- Emily’s set brother walks in.  Charlotte invited him . He looks at Emily and tries to place her.

Emily goes to talk to Jack and she tells him that she wishes she could help. He starts to grill her on Amanda, telling her that Eli told him many things about Amanda that he didn’t know. Eli pulls Emily aside and tells her she looks pretty good for a dead girl, making it clear that he knows she is actually Amanda. She tells him that she simply wanted to start over. Eli on the other hand, is running a scam and has warrants in three states.

Emily played nice with Eli but then made it clear to Daniel that he shouldn’t be welcome in the Grayson’s house. That he popped up threatening Amanda a few years ago and they weren’t close at all. Eli is winning over Charlotte which isn’t exactly a surprise. She’s as gullible as they come.

Jack talks to a guy down at the docks and he finds out that Nolan rescued him and was also responsible for Amanda’s death. Jack tells Nolan that he knows the truth about everything and he knows that Amanda originally came to town to destroy lives.

Nolan goes back to the boat  to tell Jack that the Ryan brothers saved him and that he needs to be careful.

Daniel takes Emily into the kitchen and tells her than he is trapped by the people who brought down the plan years ago. He says that his parents are hiding their money in Amanda’s foundation in case their personal assets are frozen by the feds. Emily lets Nolan know because if they can access the account they can bankrupt the Graysons.  They realize  the person in control of the account is The Falcon. Tune in next week for more Revenge!