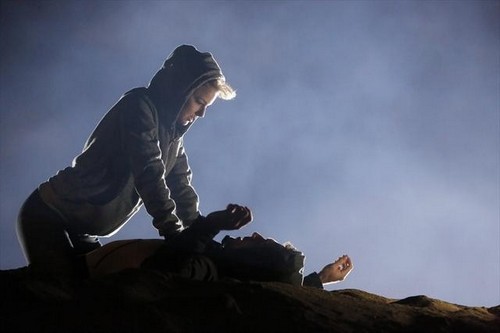 Tonight, after a one month hiatus, REVENGE returns to ABC with its winter premiere.  Tonight’s episode is called “Power”  and on tonight’s show Emily locks in on her next target.

On the last show before the break Nolan was confronted with a skeleton from his past, and Daniel’s leading role was challenged as Emily and Aiden weaved their way through Grayson Global. Meanwhile, the christening of baby Carl brought new concerns to light for Jack and Declan.  Did you watch the episode?  We did and we recapped it here for you.  Hop over and catch up before tonight’s episode.

On tonight’s show Victoria begins plotting a scheme which, surprisingly, involves Emily, while Emily locks in on her next target, and Declan discovers something that may threaten the future of the Stowaway.

Tonight’s Revenge episode 10 is going to be exciting, and you won’t want to miss. So be sure to tune in for our live coverage of Revenge — tonight at 9PM EST! While you wait for our recap, hit the comments and let us know how excited you are about the new season of the Revenge? Check out a Sneak peek video and photos of tonight’s episode below!

Emily narrates and speaks of power; how true power can never be lost or gained because it comes from within. She and Aiden are “fighting” and making love on the beach.

Daniel is approached by a woman from the Initiative who invites him into a limo to do business. She says he can uncover more secrets about his father that will make him even wealthier.

The Ryan brothers start giving Pete orders. He lies to Amanda that he is only trying to keep the peace while Declan overhears.

Victoria wants Conrad to get through to Daniel but he thinks it’s a bit of a lost cause. Victoria is thinking of ways to get him back into power and Daniel out.

Emily wants to get close to Judge Barnes which might help exonerate her father.

Emily and Victoria meet up. Victoria tells Emily that Daniel is in over his head with his new appointment. Victoria says ever since her engagement to him ended, she has noticed changes in him .Victoria thinks Emily has the power to reach him; she wants him to stem the tide before it’s too late unless of course she never loved him. Victoria wants Emily to convince Daniel to back down. Victoria would bet her life on it that Daniel still loves her. Emily and Victoria shake hands.

Victoria introduces Emily to Judges Barnes and his wife, Patricia.

Declan asks Charlotte to distract Pete while he snoops around in the back. Declan finds the drugs that was hidden in one of the coffee bags. Peter tells her how he was once in jail. Declan is able to get what he needs without being caught.

Declan tells Jack what he found. Jack thinks he may have a way out of their current situation.

Conrad tells Daniel that he stole his company and if he wants anything else, such as secrets, he’ll have o steal it too. Daniel witnesses a fight between Aiden and Emily. Aiden tells Daniel that Emily broke up with him. Emily smiles to herself as she walks off.

Daniel wants Nolan to find secret files at Grayson Global. He wants to know what he’s looking for but Daniel won’t say.

Amanda figures out that Pete is lying to her. He confesses that the Ryan brothers blackmailed them into the club. He wants her to take the baby and go.

Nolan tells Emily that Daniel has granted him access to Grayson Global. He is let in on the plan that Emily and Aiden faked their break up. Emily is only going to play nice with Daniel so that she can expose Judge Barnes’ role in her father’s conviction.

Victoria comes to see Daniel. She says it’s time to mend faces. She says that Conrad made his best business deals over cocktails and dinner parties. She invites him and makes sure to tell him that Emily will be there.

At the dinner party, Daniel tells Emily she looks great. Emily says that Aiden just wasn’t for her. Daniel is glad she found out before things got too serious. Conrad tries to undermine Daniel at dinner. Emily tries to get information out of Judge Barnes. He says he hasn’t lost a night of sleep over the conviction.

Amanda comes to see Emily. Emily invites her to stay as long as she needs. Amanda finds her looking up information on Patricia Barnes.

Aiden wants to know what Nolan was able to find out. Nolan says that he found an investor’s system luncheon backed up. It is voice activated by he can’t read lips. The woman who initially approached Daniel calls Aiden and says they need to talk.

The cops show up at the Porter’s restaurant with dogs who sniff out drugs, business is closed for the day. The dogs are trying to find drugs in the restaurant.

The woman from the initiative tells Aiden that Colleen is alive and he needs to watch himself if he wants to keep it that way.

Marco arranges a dinner for Nolan. Marco warns a chance to start over but Nolan says that there are many reasons why that I is never going to happen. He claims he has fallen in love with someone else. Marco says he’ll wait and gives Nolan a coding program. He says he is in Nolan’s corner.

Emily apologizes to Daniel for how tense things got at dinner. She claims she is going to apologize.

Declan and Charlotte are making out when the cops bust in with the dogs. The cops say they’ve found a handgun and narcotics. The cops begin to arrest Declan but Jack takes the blame. He is instead arrested.

Emily apologizes to Patricia for upsetting her but says that bruises don’t cause headaches. Emily shows Patricia the letter she wrote many years ago. Emily asks Patricia to help save more lives tonight.

During her speech, Patricia begins to tell the truth about James Palmer and David Clark. She starts to read the letter that she wrote about her husband’s illegal antics. She shows off her bruises for all of the crowd to see.

Conrad tells the press that he and Victoria are shocked by Judge Barnes’ actions. The woman from the initiative tells Daniel that they know Nolan was looking for the secret information Daniel was told about and to follow the digital crumbs.

The Ryan brothers tell Declan that things will get worse if certain people don’t come to their senses. Pete calls Amanda to let her know that he’s in jail.

Daniel comes to see Emily at her house. Daniel set he fought hard to become C.E.O. was to make things right and that he could use Emily’s help. Emily notices that Victoria is spying on them. Emily tells Daniel that her answer is yes and they kiss. Aiden sees Daniel and Emily kissing.