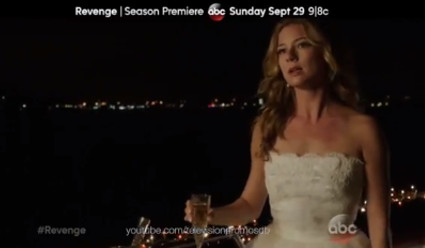 If there’s one thing you need to know about the season premiere of Revenge, this is it — according to the recently released promo trailer anyway. The trailer opens up with our girl Emily Thorne sporting a fairly wonderful wedding dress; however, it’s not long before she’s shot in the gut twice and takes an unfortunate fall into the water. According to this trailer, Revenge season 3 is going to be filled with some intense moments that will have fans either seizing up with tears or shouting at their televisions while shaking their angry fists.

It’s unclear why Emily gets shot or why exactly she’s wearing the wedding dress, but we’ll find out soon enough, as the show returns to ABC on September 29th. While that seems like ages away, we assure you that you do have the power to wait it out.

While season 2 was filled with an incredible amount of twisty-turns and story lines that dragged on and on and on, ABC president Paul Lee has gone on the record to say that this upcoming season will be significantly less windy. “I think we stumbled a little bit in the second season,” said Lee. “[Season three] is a slightly less complicated and really interesting take.”

What do you think about a “calmer” (in terms of plot) season 3? Check out the promo trailer below and let us know what you think! Keep your eyes open for more Revenge season 3 spoilers.