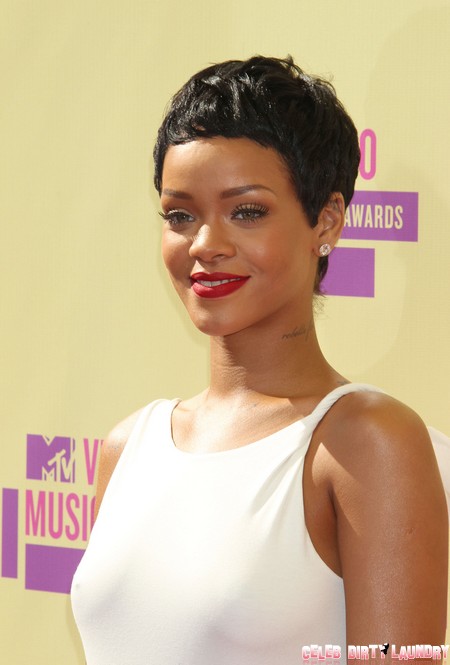 While you and I have seen Rihanna pics in every pose imaginable – whether we wanted to or not – we have been spared seeing the full monty, at least until now anyway. I mean, this chick seems to live and breathe for shock value of every situation. In fact most days she seems more devoted to that then she is to her thriving music career. This time around though, instead of Rihanna posting the shocking photo a fan beat her to the punch. It’s not the typically posed and staged RiRi shocker.

BIDI BOP is one of Rihanna’s Twitter followers and yesterday they posted a pic of the singer on one of her many Caribbean vacations. Of course she is in the tiniest of string bikinis, smaller than usual because the bottoms appear to be completely missing. Rihanna for once looks at peace and completely unaware of the fact that she is being photographed showing her goods. Her fans went bonkers yesterday when they finally got a glimpse at the tiny bit that she hasn’t already offered, her lady bits.

I doubt Rihanna was upset that she was caught fully exposed. I do think that she’s probably pissed off that her crotch wasn’t put on full display by her in an ultra-sexy photo that was intended to get a reaction. I’m guessing she probably did intend to do it eventually, on her own terms. Now that glistening moment has been taken away and the whole world gets to see what Chris Brown claims to own, before she wanted it too!

Are you tired of Rihanna’s regular antics? I’m thinking even her most diehard of fans must be getting a bit sick of it. We know she has a killer body, does drugs and has no moral code- now what? I’m not shocked or surprised by any of it any more, are you guys? Tell us your thoughts in the comments below!