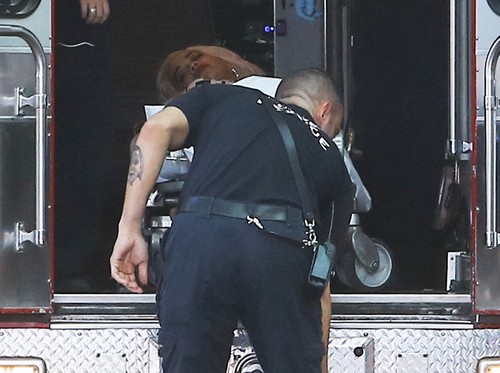 Rita Ora, the British pop singer best known for her hit single ‘R.I.P.’ and her relationship with Rob Kardashian, has reportedly collapsed on the set of her photo shoot in Miami earlier today. Photographers who were at the scene reported that Rita was immediately rushed to the hospital, and photos show her on the medical stretcher being unloaded from the ambulance, her eyes closed and her skin sallow.

According to insiders, Rita was at her makeup trailer getting ready for the shoot when she collapsed. Of course, the first assumption that anyone jumps to in these sorts of cases is drugs. Rita’s a hard partier, and it’s not hard to imagine that she may have overdosed and passed out, especially if she was in her makeup trailer at the time. From the quick reaction from the ambulance and the way everyone at the scene reacted, it had to be more serious that simply her fainting. In addition, she’s been a successful singer for a few years, and she has never collapsed on the job before.

Obviously, Rita’s doctor, David Farcy, attributed her fainting to ‘heat exhaustion’ and ‘dehydration‘. Isn’t that always the excuse? ‘Dehydration’ was also Justin Bieber‘s excuse for cancelling a show in South America, and it’s become the go-to excuse for any celebrity who has something to hide. Also, what exactly does Rita have to be so exhausted about? She barely does anything, and her career is lagging at the pace of a turtle because of that.

Rita’s already been discharged and the doctor claims she’s fine, which he is probably under obligation to do. Now, if she’s already been discharged, it’s probably not an overdose. They usually keep you under observation in the hospital for several hours if you have overdosed. But I don’t doubt that it could be drug-related, especially when you look at her past and the amount of times she’s been spotted partying around people who do drugs on a regular basis.