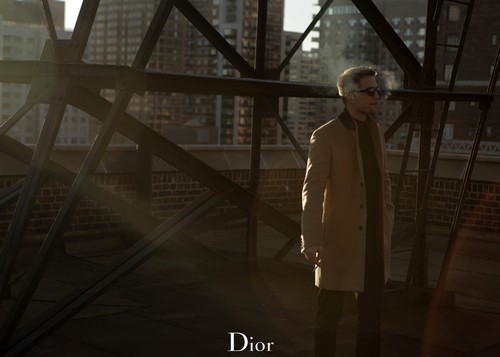 Twi-hards, rejoice. More Dior photos of Robert Pattinson for you to stare at, tattoo onto your skin, and transfer onto your pillows and bedsheets.

Dior’s released four new photos of their Winter Wonderland promo shoot featuring Rob and his fellow Dior model. He certainly looks happy, doesn’t he? Either it’s genuine, or his acting skills have improved tenfold since he started Twilight.

The first image shows Rob and a blonde wrapped up in each other’s arms wearing [what else?] Dior coats, with the snow falling around them. It pretty much looks like a Christmas card, and I’m not sure what it’s trying to sell us? Postcards?

The next photo’s even more postcard-y, although Rob’s non-smiling macho face makes it less appealing. You can see even less of their outfits this time around, but more of the background.

The third photo’s in a dingy bathroom somewhere, and the only thing it’s encouraging in me is a strong desire to go wash my hair. Rob is wrapped in nothing but a bedsheet, but he has his arms around the Dior model, yet they both look bored. And honestly, this is the least convincing shot of the group.

And for our final shot, we finally have a Dior promo that looks like an actual promo. Rob’s wearing a beautiful Dior coat and sunglasses, and this is by far and away the best shot in the group. Overall, a lackluster group of photos, but I blame whoever put together these shots. Rob’s a great model, and it really depends on the way he’s shot.

Anyway, I just thought of an idea. Why doesn’t Dior try to put Rob and Jennifer Lawrence together for a campaign, considering they’re both Dior reps? I guarantee their sales would see a boost, and it would be very entertaining to see the behind-the-scenes videos of that.

What do you guys think? Good idea or no? Let us know your thoughts in the comments.