Robert Pattinson As The Next James Bond (Photo) 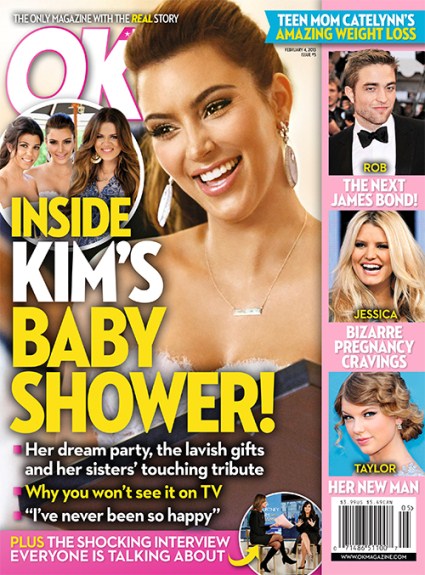 Kim Kardashian is due sometime in July, which makes an early spring wedding on perfect schedule! Though Los Angeles doesn’t really have seasons, she’ll be enjoying fresh flowers, lavish gifts, family time, and camera-free joy this spring! The star’s big news has barely been out a month, but we’re already ticking, trying to figure out the sex, name, star-studded pre-baby parties the Kardashian’s will be hosting in it’s honor! Ok! Magazine reports in print edition February 4, 2013, that her sisters are planning a touching tribute. Maybe to deceased dad, Robert Kardashian? Or to their loving mother Kris Jenner, who never loved them so much as sold them by the pound?

Robert Pattinson is struggling to make a name for himself outside of the Twilight franchise, and it looks like he may have found the perfect new character to put on: James Bond! The spy brand has been booming, thanks to the action-packed revamp films starring Daniel Craig. Will Rob follow in the footsteps of so many great actors and slip into the shoulder holster of 007?

Teen Mom star Catelynn Lowry is planning a summer wedding with longtime fiancé Tyler Baltierra. Despite the distance (he’s living in New Orleans to pursue acting, while she’s at home in Michigan) Catelynn’s wedding gears keep turning, and she’s dieting to prepare for the day.

Jessica Simpson is pregnant—so soon!—and has sworn to never gain as much weight as she did with Maxwell. The Weight Watcher’s spokeswoman has confirmed she won’t be on any weight loss diets while pregnant, but is careful to fill her plate with whole grains, fruits, vegetables, and lean proteins. Sounds healthy enough—except, like every expecting mother, she’s got weird cravings!

Taylor Swift and Harry Styles have been broken up for a hot minute, but, in typical Taylor fashion, she’s already on the hunt for her next ex boyfriend. Who is he? Pick up this week’s issue of Ok! Magazine, on newsstands now!