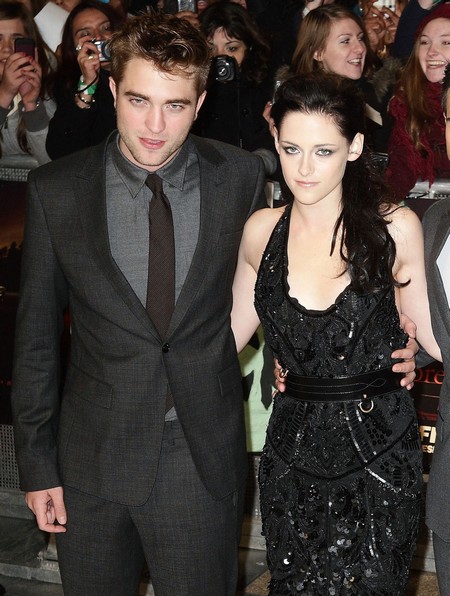 Kristen Stewart and Robert Pattinson are dating again. No, they’re not dating, they’re on a break. No, they’re back together but are taking some time off. No, they’re broken up while Rob is off hooking up with some blondes. The trampire is out trampiring with people in LA. No, now they’re back together and planning to elope. It kind of gives you whiplash, doesn’t it? Thus is the *epic* romance of Edward and Bella. Oops, sorry, I meant Robert Pattinson and Kristen Stewart. However, it is true that since the day Twilight came out, there have been approximately 1,245,456,788,000 reports about these two, most of which are wildly contradicting and make no sense.

Last we heard, Kristen is in Los Angeles, being single and jobless, while Rob has just come back from Australia, after being single and busy working. It was reported that Rob was happy he didn’t have to deal with Kristen’s drama in Australia, and was finally having a relaxed break away from all of the relationship drama.

However, it’s now being reported that Kristen and Rob are completely fine, and they are actually planning to elope  now that Rob has returned from Australia. Taking this with a grain of salt, my main question is when exactly they would plan to ‘elope’ considering that Kristen is rumored to be starting ‘The Big Shoe’ within the next month, and Rob’s schedule is very tightly packed with back-to-back movies for the next year.

OK Magazine reports that a ‘source’ close to Rob and Kristen says, “Rob has always had this romantic notion of making a baby. And he’s not even talking weddings on the beach, or in a castle, in some far off country. For Rob, eloping means slipping away to someplace in the backwoods, finding a priest, and coming back married.” The source adds, “If he feels for someone else he knows he’d always be thinking about Kristen. What she was doing, who she was with. The truth is, he needs to be with her and she clearly feels the same about him.”

I don’t know if Rob fans are going to be happy about this. In our last article on Kristen and Rob, it was rightly pointed out in the comments  that a lot of Twilight fans are not very happy with Kristen, and while they support Rob, they would rather see the Trampire away from him. The question is, does Rob feel the same way? I still think that Rob would much rather have his peace and quiet, and just continue to work, than reunite with Kristen and have to deal with the attention. However, I do think that Kristen expects a reconciliation and is probably waiting for one. The duo were spotted together at the Ye Rustic Inn Bar on Tuesday night, so they’re at least hanging out again, if not actually ‘together’. I do think that getting married is a stretch though, especially for these two.

Let us know whether you think they will actually elope, or it’s just hogwash put out there by Kristen’s team.