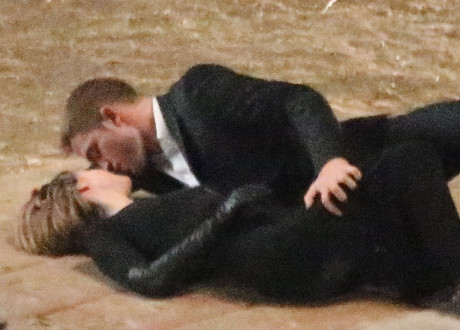 In Maps to the Stars, Robert Pattinson reunites with Cosmopolis director David Cronenberg and can be seen getting hot and heavy with Mia Wasikowska. In photos taken on the set, Rob and Mia were spotted heading straight for Smoochville. The pictures, which we have for you in a gallery below, feature Rob and Mia holding hands, walking, embracing, and then eventually falling over each other — into a lip lock!

An official summary for the movie is as follows:

A contemporary tale exploring the demons of our celebrity-obsessed society, the story follows the Weiss family, which is led by Stafford (Cusack), a psychotherapist and life coach who made his fortune with self-help books. His wife (Williams) is the overbearing mother-manager of their 13-year-old son (Bird), a TV star recently out of drug rehab. Their estranged daughter (Wasikowska) has just been released from a psychiatric hospital and befriended a limo driver (Pattinson) who is also an aspiring actor.

One of Stafford’s celebrity clients is Havana (Moore), an actress with an unusual new assistant. Havana’s dream of reprising her dead mother’s (Gadon) starring role from the 1960s slowly crumbles while ghosts, death, and all manner of vices collide.

Wow, sounds pretty great, if you ask us! What do you all think about Robert Pattinson locking lips with Mia? We have a feeling the K-Stew fans aren’t going to be amazed by the situation.