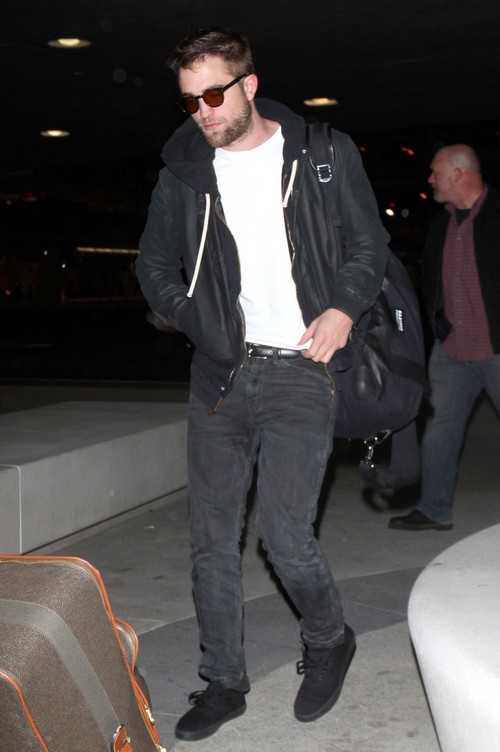 Robert Pattinson is back in London, and it’s probably for the best. He was getting up to all sorts of probably-not-very-good things in Los Angeles, including constant partying and even rumors of cocaine use.

He was spotted in London at Sienna Miller’s pre-birthday bash for good friend Tom Sturridge. Rob and Tom have been friends for a very long time, and it’s probably better for Rob to be hanging out with old friends in England than new friends in LA. In fact, it would probably be a prudent decision for Rob to just stay in London, and only return to Los Angeles for work. After all, why does he need to be in LA? It’s not like he has a girlfriend there anymore, and he’s at the point in his career where he can travel for meetings and get offered jobs without auditions.

Of course, I can already foresee the glutton of reports coming in tomorrow about how Kristen Stewart secretly teleported to the party from LA, or how Rob was constantly thinking about her. As we know, it’ll be a load of balderdash. Kristen and Rob are not dating, and they haven’t been dating since the beginning of the year. And I guarantee you, Rob’s too busy with his harem of admirers to miss Kristen, especially while he’s off partying in London.

Rob has several films in pre-production right now, including Mission: Blacklist and Queen of the Desert. Let’s hope his career prevents him from returning to Los Angeles anytime soon.

Kristen Stewart without Rob getting gas at a gas station in Los Feliz, California on December 6, 2013. Kristen was driving a used Isuzu Trooper that she recently purchased. Kristen also had a Christmas tree delivered to her house – and Rob won’t be kissing any trampires under the mistletoe.