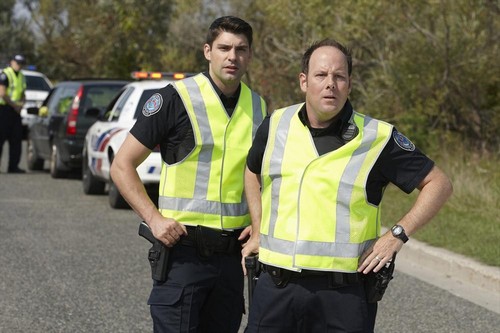 Tonight on ABC ROOKIE BLUE continues with a new episode called, “The Kids Are Not Alright.” On tonight’s show while Andy and Gail try to convince a teenage boy that no heartache lasts forever in order to save him, Swarek leads the hunt for the hooter of another teen.  Did you watch last week’s season premiere, we did and we recapped it here for you!

On last show Andy and Officer Marlo Cruz, Swarek’s new girlfriend, butted heads on their first patrol together. Their different ways of handling the job were put to the test when they confronted an emotionally disturbed woman who was losing control – and explode when one of them was forced to make a crucial life-saving decision to pull the trigger. Meanwhile, the rest of 15 Division was hunting down an armed burglar with a novel MO after a string of ATM robberies, and Dov was forced to work with new rookie Chloe Price after their indiscreet first encounter.

On tonight’s show Andy is ready to get away for a much-needed long weekend when she and Gail, working a routine highway spot check, discover a teenage boy bound and gagged in the trunk of a car. The two find themselves plunged into a messy tale of young love gone wrong and must try to save the boy from making a tragic mistake. Meanwhile, Swarek, Oliver and Chris are hot on the trail of a gunman who shot a 16-year-old who may have gang connections.

Tonight’s episode of Rookie Blue takes on two cases at once. First 15 Division is investigating the death of a 16 year old that they believe has gang ties. The second issue begins as a routine traffic stop for Andy and Gail. They are directing traffic and find a teenager behind the wheel looking distraught. When he can’t answer the questions they ask to see his ID and he takes off. Of course they chase and catch up with the car only to find the driver gone but with a teenager named Alex in the trunk.

As Gail and Andy offer to give Alex a ride home he gets a nose bleed which makes them detour to the hospital. Andy decides to wait with Alex and has to handle her exes ex being Alex’s nurse. While waiting in the waiting room Andy hears a commotion and as it turns out the nurse walked in on Alex changing and they realized that he is a she.

As it turns out Alex left home because her family couldn’t accept her and she came to town to visit the only friend she has. The girls father came home and flipped out stuffing her in the trunk. Meanwhile the check point nets the red car connected to the assumed gang killing.  Swarek has a guy in custody that ends up being the dead kids cousin. 15 division suspects that Caesar is planning on cleaning up the mess himself.

and arresting her brother for attempted kidnapping. Teddy is losing his mind because he came home and found “that guy/girl” on top  of his sister half dressed.  Dawn is crying and apologetic for creating the whole mess. They take both teens to the station and put them in separate rooms while waiting for their parents to arrive.

Swarek is piecing together the case that Caesar is involved in and he is quickly realizing that the bullets were intended for him not his young cousin. He gets him to believe that he was set up and Caesar finally gives up the shooter.

Alex calls Dawn basically to say goodbye and Andi intercepts the phone. She and Gail are in a panic to find Alex who appears to have overdosed on something. Alex and Gail bust in a motel room door and find Alex on the floor with a slit wrist. She gets her to the hospital and tells her that she’ll be there and that the world is a better place with her in it. Dawn stops to visit as Andi decides to leave.

The episode wraps up with the whole gang at a partie together. Tune in next week for more Rookie Blue.