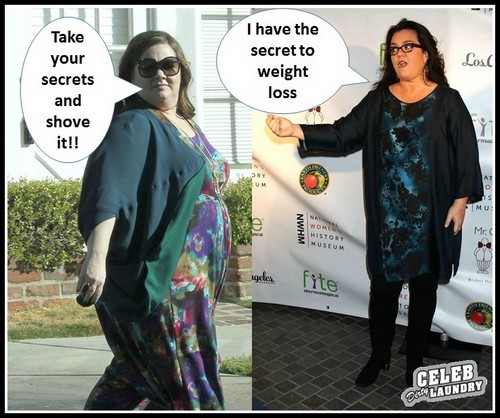 If you want to lose weight the person you would be going to for advice would be Rosie O’Donnell right?  WRONG!  It seems Rosie who is no light-weight herself now considers herself an expert on weight loss, I know ridiculous.  Rosie had a health scare in August 2013 when doctors found her carotid artery was 99% blocked and they had to insert a stent.  So now Rosie wants to save all obese people.

The first person on her radar was outspoken actress and comedian, Melissa McCarthy.  Rosie reached out and offered to help The Heat star lose her weight.  Melissa, who has been the brunt of a lot of criticism about her weight told Rosie in no uncertain terms to, mind her own business.  Rosie is not giving up,  she is trying to convince Melissa to go on a healthy diet for the sake of her two daughters.  The GLOBE reports, “Rosie thinks most comedians are secretly depressed and only pretend to be happy because they are suppose to make people laugh.”

Rosie went so far as to reach out to Melissa’s camp and offer to mentor her, by setting up a weight-loss program.   Melissa turned her down full stop, she told her when she wants to lose weight she will hire a professional.  No one is forcing Melissa into anything and especially not Rosie.

Melissa’s weight is a sore spot with her and she is tired of people giving her their two cents worth.  Critic Rex Reed called her a, “female hippo,” in a review and her recent Elle magazine cover caused a lot of controversy when she wore an over-sized coat.  Plus-size women felt she should embrace her body and not hide it.

Meanwhile Melissa has said the controversy bothers her a bit, but at the end of the day she is happy.  She has a great husband, two great kids and she will be the one who decides when and if she needs to lose weight.

What do you think CDLers, should Rosie just back off and leave Melissa alone?  Hit the comments and let us know how you weight in on the issue!