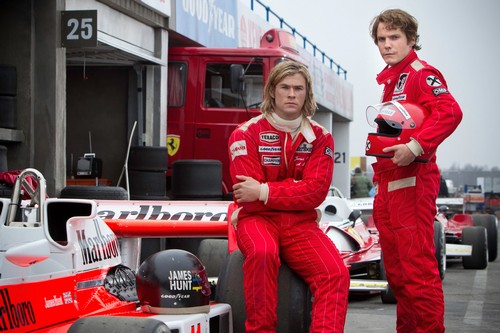 When I first saw the previews for Rush, I didn’t expect it to be a movie I would be interested in. Yeah, race car driving is fun, but did I want to watch an entire movie about it? I’ll be honest, pretty much the only reason I went to the screening was because of Chris Hemsworth and Daniel Bruhl [a vastly underrated actor who’s starting to get his turn in the spotlight].

But it was SO WORTH IT! First of all, yes ladies, Chris Hemsworth is shirtless and looks hot. So that’s there in spades. But you know what’s really surprising about this movie? Even though I didn’t and don’t care about race cars or racing, I cared about the competitions in this particular movie – and you know why? Because the character drama was SO GOOD.

Let me back up a little. So basically, the film chronicles the lifelong enmity that existed between 1970s Formula 1 rivals James Hunt and Niki Lauda. It’s reportedly a very famous story for fans of the sport, and although the real-life Hunt is no longer alive to witness the movie, Lauda is supposedly very happy with the final product. And I can see why. Both characters are fully sketched out and very well written, and the relationship between them is very complex, realistic, and surprisingly emotional. While the races were predictably fast-paced and gripping, Bruhl’s performance was absolutely fantastic. Chris Hemsworth was also good, but he honestly wasn’t given a whole lot to do – apart from being cocky and hot, and that’s not too much to go on. But Bruhl had to convey such a wide spectrum of emotions, and he hit it out of the park.

So the movie: worth the price of admission. Go see it if you love thrills, half-naked Chris Hemsworth, and amazing characters.

Will you guys be watching Rush? Let us know in the comments.