Ryan Ferguson Finally Freed: A Decade in Prison For a Murder He Didn’t Commit 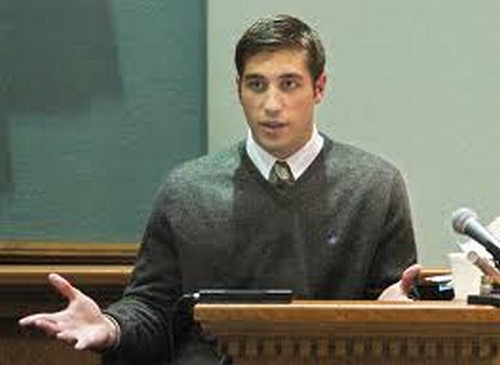 This week marked the end to a decade long nightmare for 29 year old Ryan Ferguson, when the Missouri appeals court overturned his conviction saying, “Newly discovered evidence clearly and convincingly establishes that he is actually innocent.” This allowed for his long overdue release from prison after being jailed for a murder he didn’t commit, and for which he was convicted for off of a false confession and false eyewitness testimony. This case highlights serious flaws within our justice system – flaws that took away a man’s freedom based on nothing more than shaky testimony.

It all began in 2003, two years after Columbia Tribune sports Editor Kent Heitholt was found beaten and strangled to death by his own belt in a parking facility in 2001 on Halloween night. Charles Erickson – who had a history of substance abuse and mental illness – walked into a Police station saying that he thought he had repressed the memories of killing Kent along with his friend Ryan Ferguson. From there, law enforcement and the prosecutors seemed to turn their agenda from finding the truth to just getting a conviction. And they did.

Following a lengthy interrogation where he was badgered and fed details of the murdered, Erickson confessed to the killing and implicated Ferguson. In fact Erickson said that it was Ferguson’s idea, and it was Ferguson who committed the actual act all so that they could get some drinking money.

During his initial interview with detectives, Erickson was unable to even identify what weapon was used. He guessed a couple of times before detectives told him what was used and how it was used in the murder. He was also unable to produce any other accurate details about the event, and yet by the time he took the stand at Ferguson’s trial he was able to provide enough details about the murder to convince a jury to convict Ferguson despite the fact that there was NO physical evidence that could corroborate Erickson’s story. It is not that there wasn’t physical evidence at the crime scene – there was hair, blood, and fingerprints – but none of it belonged to Ferguson.

The only other evidence that prosecutors had was eyewitness testimony from Jerry Trump who was a janitor where Heitholt worked. When Trump was first interviewed by Police he said he couldn’t identify who had committed the crime, and yet – like Erickson – he was much more clear on the details and was able to place Ferguson in the vicinity of the crime scene on the night of the murder. Based on eyewitness testimony alone – one which was given by Erickson in return for a lighter sentence, and the janitor – Ferguson was sentenced to 40 years in prison.

Through it all Ferguson, his family, and many members of the community where he grew up maintained that he was innocent and being wrongfully convicted. His first chance of freedom came 5 years after his conviction when Erickson came forward to admit that he had made the whole thing up and wanted to make things right. At this time Trump also admitted to lying about seeing Ferguson that night saying that he had felt “intimidated,” into producing a positive ID. April of 2012 Ferguson was granted a new trial where both Erickson and Trump once again took to the stand, this time to admit that they had committed perjury by giving false testimony implicating Ferguson in the murder of Heitholt. Despite the fact that there is not a single piece of evidence tying Ferguson to this crime other than eyewitness testimony, which was being recanted, Judge Daniel Green surprised everyone when he decided that there was not enough reliable new evidence to overturn the conviction. Once again Ferguson was let down by the justice system.

I refuse to use the term luckily and will instead say FINALLY Ferguson was shown sympathy and granted justice when last week a Missouri state appeals court panel looked at this case in its totality and decided to overturned his murder conviction, because there was not a shred of evidence linking Ferguson to the murder and ruling, “that the prosecution withheld evidence from Ferguson’s defense attorneys that could have perhaps exculpated him when he was on trial for the murder of Columbia Daily Tribune sports editor Kent Heitholt.”

This case is frustrating, sad, and quite frankly frightening to think that in this day in age someone could be imprisoned on basically nothing but eyewitness testimony that was obviously coached and coerced. Then to have a Judge deny him freedom after the two eyewitnesses went under oath to admit to lying despite the fact that they could now face perjury charges. Ferguson has now gotten his justice, but justice delayed is justice denied, and he can never get back those 10 years that were taken from him.

For his part Ferguson has been amazingly calm throughout all of it. He doesn’t appear to be hardened by what he and his family endured, and that is truly inspiring. In fact he has shown grace and forgiveness towards his former friend Erickson who put this travesty upon him by saying that Erickson should also be freed because, “he’s not a murderer. He’s been taken advantage of by those in the justice system.”

Upon being released Ferguson said he was most happy for his parents who went through so much since this all started, and expressed his gratitude towards everyone who supported him and fought for his freedom because they were his hope where there seemed to be none.

Despite his positive outlook on the future and his forgiving nature, he is rightfully jaded about the justice system saying, “As you can see, really, to get arrested and charged for a crime you didn’t commit, it is incredibly easy and you can lose your life very fast, but to get out it takes an army,” a horrible truth that he knows all too well.