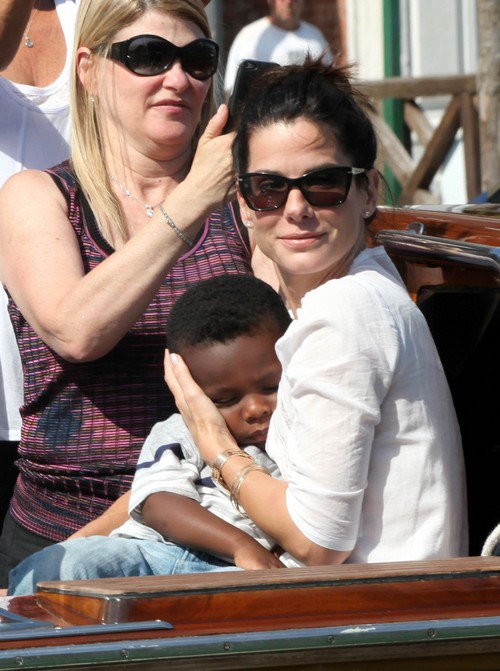 Although Sandra Bullock and George Clooney have already denied any rumors of a romance between them, it seems as though Sandra’s son, Louis, has gotten close to George over filming and promotion for Gravity.

Sandra revealed at the press conference for the film, “My son thinks he’s a very cool dude. If there was a choice between me and George and [director] Alfonso [Curaón], my son will leave to go with George and the guys. He’s a boys’ boy – he has to go and talk to the men. He asked, ‘Where’s George and Rande [Gerber]?’ I’m like, ‘What? I don’t know.’ He goes, ‘I need them.’ We went to meet with them and they had man time. I stood off to the side and waited for them to finish, and then I was allowed to take him back.”

The rumors that something’s going on between Sandra and George have refused to die down, largely because the public seems obsessed with the illusion that Sandy will be the woman who makes George settle down.

It will be very interesting to see who George’s next girlfriend is – he has been vocal about not really wanting to get married or having children, which means that there isn’t any pressure on him to do anything quickly. He can just life and enjoy it, much as Sandra has been doing since she adopted her son.

Sandra with Louis in Venice and alone at TIFF