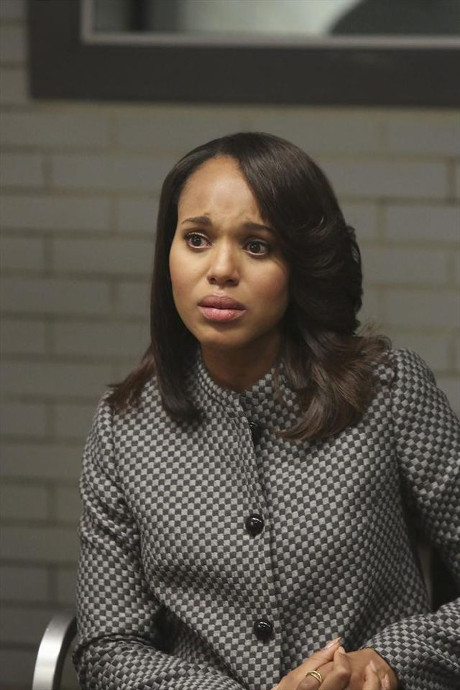 Tonight’s episode of Scandal was, as always, deliciously scandalous! If you missed tonight’s episode, be sure to check out our full recap RIGHT HERE so you can get caught up. As we saw earlier, the team got closer to the truth regarding their current predicaments, loyalties were tested, and relationships were pushed to the limit — some might even say a breaking point! Cyrus also tried to deal with his own crisis and realized that he may have taken things a bit too far.

If spoiler-nuggets upset your stomach, then be sure to stay away from the below spoilage. Here’s the official release for Scandal season 3 episode 10 “A Door Marked Exit” — Now that the truth is out there, things will never be the same and everyone will have to face the consequences of their actions, on ABC’s “Scandal,” THURSDAY, DECEMBER 12 (10:00-11:00 p.m., ET) on the ABC Television Network. Scandal stars Kerry Washington as Olivia Pope, Columbus Short as Harrison Wright, Guillermo Diaz as Huck, Darby Stanchfield as Abby Whelan, Katie Lowes as Quinn Perkins, Tony Goldwyn as President Fitzgerald Grant, Jeff Perry as Cyrus Beene, Bellamy Young as Mellie Grant, Joshua Malina as David Rosen and Scott Foley as Captain Jacob “Jake” Ballard.

Are you looking forward to next week’s episode? If so, hit up the comments section below and let us know what you’re most looking forward to. What do you think about all the secrets and lies being uncovered on this season?

STILLS FROM “A DOOR MARKED EXIT”