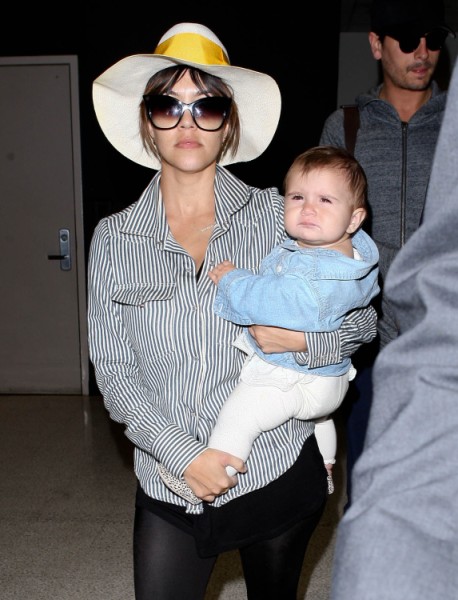 I’d ignore her too if she acted like that during my birthday celebrations! But man, Kourtney Kardashian gives great bitch face, doesn’t she? No one in her family does it better. You just know she doesn’t want to be messed with and it’s better to stay away. That’s why I like her so much. You can gather that Kim’s all smoke and mirrors. There isn’t much that’s authentic about her but Kourtney actually has a real personality that she’s not afraid to show. Sadly it might have come out during baby daddy, Scott Disick’s 30th birthday party this weekend.

The Daily Mail has the pics. Technically I suppose it’s not the official birthday party in Las Vegas. Scott Disick celebrated the night before by hosting a party at the Bellagio with extended family members Rob Kardashian and Kris Jenner. This little pool party looks like recuperation. But, clearly, Scott is in usual Scott style and entertaining his court. Kourtney’s obviously over it. Either she’s pissed about something or just hung over. Perhaps she’s done with the whole Last Vegas thing. She’s got two kids and is in her early 30s. I could see the parties getting pretty old – especially with how often that family hosts them in Vegas.

But is there trouble brewing? Oh, wouldn’t Kris like us to think so! I doubt it. That’s probably just Kourtney’s morning face/attitude.  She doesn’t feel like playing along so she won’t. I respect that. Of all the Kardashians I get the feeling that Kourtney could really do without the reality TV nonsense. Kim talks a good game about scaling back but Kourtney could pull the plug at any time. I’m not sure she wanted all the celebrity in the first place. She just wanted to expand the empire. I’d say she’s accomplished that and she’s ready to move on. Scott on the other hand…. He’s pretty much the male Kim.