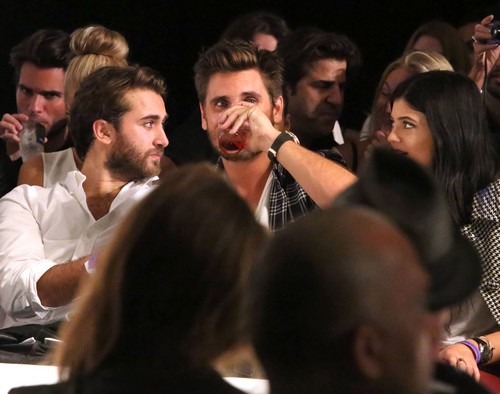 Scott Disick is a horrible influence on Kendall Jenner and Kylie Jenner. So what else is new? He’s been known to give them weed and smoke up with them, so should it be a surprise that he gets wasted and takes them to 21+ clubs as well? According to a report from TMZ, Scott got wasted during the Day by Day Fashion Show in LA Live on October 15th, and he was so drunk and belligerent that he was almost kicked out of the show.

According to the report, Scott created such a ruckus that one of the models even flipped him off as she was walking down the runway, and Scott almost made the designer, Cedric Benaroch, take a tumble down the runway when he grabbed onto him and pulled. In fact, I can guarantee you that the only reason he wasn’t kicked out was because he was famous.

Anyway, all that is old news – this isn’t the first time Scott’s been out of control, and I doubt it will be the last. But you know what shouldn’t be forgiven? The fact that after he got this wasted, he took underage Kylie and Kendall to a 21+ nightclub called Vignette Lounge in West Hollywood. What kind of responsible adult would do that? Especially considering that he is their brother-in-law and he’s responsible for them.

And of course, because they are the freaking Kardashians, they were let in. And apparently, in addition to there being alcohol, there was also nudity because it was ‘Wax Rabbit’ night at the club. So this is how the younger Kardashians are being raised: by their irresponsible brother-in-law who gives them weed and takes them to clubs while they’re underage and gets them wasted.

What do you guys think of Scott’s behavior? Let us know your thoughts in the comments.