Sean Lowe and Catherine Giudici Plan To Break Up After DWTS

BY Cate Meighan on April 13, 2013 | Comments: Leave Comments
Related : Dancing With the stars, Dancing With The Stars Season 16, Sean Lowe 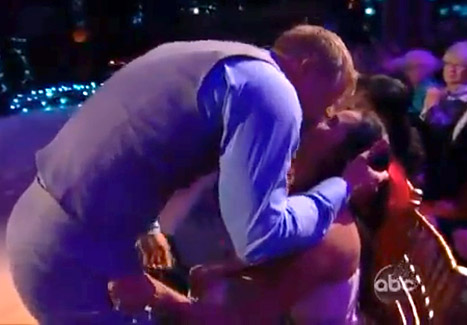 Remember last month when Sean Lowe announced to the world that if it were up to him he would be dragging Catherine Giudici to the courthouse to get hitched the very next day? Well, it’s a good thing that she wanted to hold out for a real wedding (thrown by ABC of course) because swapping vows would have been a huge mistake for the blonde prayer warrior! We have already told you that the newly minted couple has been spotted fighting in public more often than not. Catherine is miserable and really, who can blame her?

She uprooted her life in Seattle to come to L.A. To be with her man but the situation sucks. They live in separate apartments because Sean refuses to lay a finger on her before they marry, but then she is watching him bump and grind on the dance floor with Peta Murgatroyd and that isn’t sitting well at all. Sean trains 8 hours a day with Peta for Dancing With the Stars while Catherine sits at home, shops or now simply cries because she is bored and lonely.

ABC execs realize that this relationship isn’t going to make it to a televised wedding and they are begging the couple to stick it out for as long as they can to avoid embarrassment. Catherine wants to go home but realizes that she is stuck and according to the April 22nd print edition of In Touch, she and Sean have agreed not to split before his stint on DWTS ends. If they make it that long then at least it will be more than just a couple dismal weeks.

The real question is whether or not Catherine can keep up appearances. When the couple is in public they are mushy gushy because they know that they have to look happy. Sean IS happy- about spending time with Peta so at least he can draw on that to help him fake it. Catherine just needs to get out of there fast. How much longer before she buys a one-way ticket to Seattle? Tell us your thoughts in the comments below!