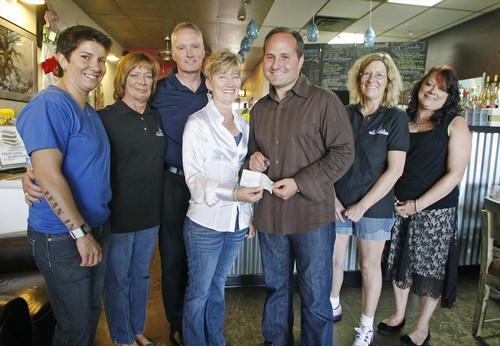 SECRET MILLIONAIRE returns to ABC tonight with a whole new episode called, “Jay Deutsch: Phoenix, AZ.”  On tonight’s show self-made millionaire and marketing guru Jay Deutsch spends a week working with grassroots organizations in Phoenix, including a coffee shop that helps victims of domestic violence and a sports program for children in need.

Each week of the show follows one of America’s most successful business people for one week as they leave behind their lavish lifestyles, sprawling mansions and luxury jets, conceal their true identities, and go to live and volunteer in some of the most impoverished and dangerous neighborhoods in the country. Their mission is to discover deserving individuals who continually sacrifice everything to help those in need, and ultimately encourage others to do the same.

On tonight’s show Marketing guru and self-made millionaire Jay Deutsch – Chief Executive Officer and Co-Founder of BDA – leaves his life in the Pacific Northwest to travel to Phoenix, Arizona in search of people and organizations in need. Deutsch is participating in “Secret Millionaire” in honor of Susan Brockert, a friend and longtime BDA employee who was murdered by her boyfriend during a company retreat.

While in Phoenix, he encounters many grass-roots organizations, including Cup O’ Karma, a non-profit that supports victims of domestic violence, Heart For The City, an after-school program that teaches young boys not only the fundamentals of football, but life lessons with a mission rooted in education, and A Stepping Stone Foundation, a community-based organization providing educational programs for both children and their parents. After spending a week in Phoenix, Deutsch shares the surprise of a lifetime with these philanthropic organizations.

Tonight’s episode 2 looks like it going to be great and you won’t want to miss it. So be sure to tune in for our live coverage of ABC’s Secret Millionaire episode 2 — tonight at 8PM EST!

RECAP: Jay is looking forward to this new adventure, Jay lives in Seattle, Washington and owns BDA, it really is a family business. He is married for over ten years and has three children who he spends a lot of time with. One of the toughest times he has ever had was an employee, Susan, who was murdered in domestic violence. This week, he wants to make a big dent in domestic violence. His wife is happy that he is going to do this because it will help him heal. Jay has to leave everything behind, all traces of his identity before he embarks on his journey. Jay is going to tell the people he meets that he is a part of a documentary, he heads to Phoenix.

Jay stops at a coffee shop “Cup of Karma” that is a non-profit organization that helps women affected by domestic violence, he meets Gwen. Jay meets Mona who is a survivor of domestic violence and the founder of the coffee shop, she has three girls and her husband used to tell if she called the cops he would take the kids from her. Now her daughters are 36, 34 and 30 and she is so proud that she now helps others that were once in her situation. Mona has to bring some donations over to the house, she asks Jay to go with her.

At the house, Jay meets Julie and Mona gives her the donations and explains to Jay how important the donations are. Mona explains to Jay that she is reaching out to the police department as well because the most dangerous time for a woman is when she leaves the home. Mona invites Jay to an event that she is having at the coffee shop in a few days.

Jay is on his second day and is having a hard time because he cannot contact his family. He goes for a walk and finds some kids playing football. The coach is a volunteer for  “Heart for the City” and he is just trying to get the kids make it through school. Jay offers to help, he meets Carlos who is a school janitor and also volunteers. Carlos tells Jay that it is a battle, but he loves helping the kids. A lot of the kids family are in gangs and prison, they don’t want that to happen to them. Jay meets Mike, he is the first coach that joined after high school. His mother was in prison, he lived with his grand mother and Joe helped him to become a man.

It’s a new day, Jay is homesick but is ready for his adventure. Joe stops at “The Stepping Stone” that is a literacy program and have downsized down to one campus from five because of a lack of funding. Jay meets Janet who is the teacher in the class of small children. Jay thinks Janet is doing a great job, she tells him that have the programs have been cut and theirs is in jeopardy.

Jay heads back to “Heart for the City” and finds out more about how much of a budget it takes to keep the program going.

Jay heads back to “Cup of Karma” for their event, Linda King whose daughter at 28 years was beaten and died at the hands of her abuser. She was married for six weeks when she had her first black eye and other injuries. Her daughter filed for divorce, but then let her husband back into her life – he killed her. Jay can’t listen to any more, he heads out of the cafe. He has learned more about domestic violence today than he has in his 44 years. He really didn’t understand how much of a problem this was in today’s society. Jay has cried all day and wants to try and figure out how he can keep his dear friend Susan’s legacy alive.

Jay was accepted with open arms as a volunteer and hopes that everyone feels the same about him after his reveal.

Jay first goes to visit the football field, he speaks to everyone and thanks everyone for having him at practice. He then tells them that he is a millionaire. He is there to present them with a cheque for $40,000.00. Jay is not done, he loves what Carlos does and he gives him a cheque for $10,000.00 to do something for himself. Another surprise, Jay got a new van for the team.

Jay then heads back to the school and reveals that he is a millionaire and present “The Stepping Stone” with a cheque for $50,000.00. Jay then surprises one of the volunteers at the school who was a teenage mom with college tuition for $5,000.00 once she gets her GED.

Jay’s last stop is “Cup of Karma”, he goes to see Mona and Gwen, tells them the truth. He tells them his story about Susan, then he gives them a cheque for $100,000.00. Mona tells Jay that one of their houses is going to be named after Susan.

This experience really answered some deep questions that Jay had.