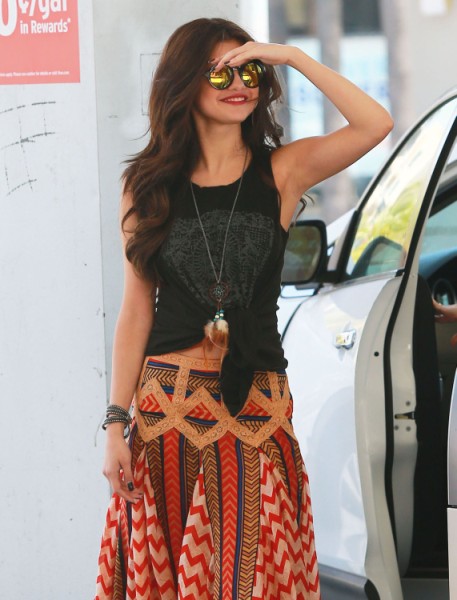 Well, this is what good girlfriends do! Take note ladies. You don’t let friends date Justin Bieber for the hundredth time. Pull that plug! Throw out all the stops! Throw every guy you know in front of them! Humiliate him in public! Anything, just don’t let them keep making the same boneheaded mistake. Luckily, Selena Gomez has a friend like that in Taylor Swift.

Us magazine is reporting that Selena is hooking up with Taylor’s tour partner, Ed Sheeran. Apparently he’s more solid and is “a lot deeper” than Justin. Well, no shit. A sea urchin in deeper than Justin Bieber. It’s just the beginning so no need to freak out and make it into something bigger than what it is but it’s a nice start. I thought Selena was hooking up with her ex co-star David Henrie but maybe they’re just friends. Or maybe she’s kicking it with both? Good for her. She’s young and hot and single and doing exactly what she is supposed to be doing. She doesn’t need to be following Justin’s toxic ass around scraping by on his leftovers.

Oh, Lord you want to hear another amazing Justin story? He got royally dissed by Kid Rock who compared him to Vanilla Ice! That’s kinda the worse person ever to be compared to, yes? But is Kid wrong? He told Howard Stern: “The kid’s young. He’s got some money. He’s got the world in his hands. It’s just kind of sad to see him go down this trajectory. It’s gonna be a very long ride down.  We all know the story. I kind of feel for the kid, to be honest with you.”

I don’t know what’s worse – your ex rebounding with a red-headed hobbit-looking kid or being compared to Vanilla Ice. Regardless, not the best week again for Justin Bieber.

Do you think the Selena Gomez/Ed Sheeran relationship has a chance or is he just a rebound?