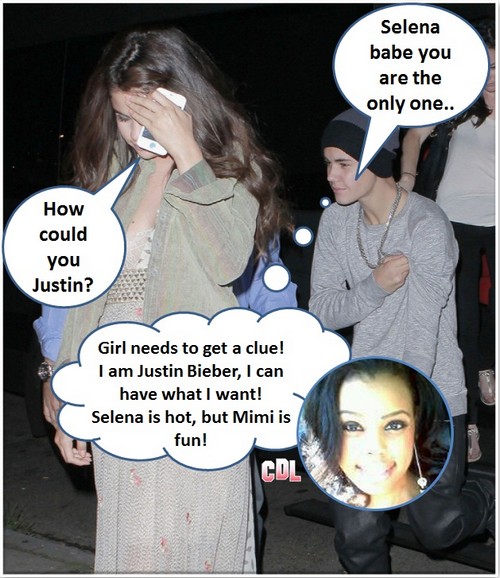 A Selena Gomez and Justin Bieber reunion is unlikely to happen after the former Disney star removed her ex-boyfriend’s number from her phone. Gomez, who was spotted at Justin’s house last week, has supposedly given up on trying to get back together with the 18-year old because he just keeps on messing up, and she didn’t sign up for a relationship that has her looking out for her boyfriend 24/7.

It’s a fair point that she makes, considering that JB has been acting crazy these last few weeks; he’s smoking weed constantly in public, swapped his white friends for black to live up to his bad boy image, drinks sizzurp that’s provided to him by his friend Lil’ Za, and even gave a girl oral sex while he was spending time at the Four Seasons Hotel with Lil’ Twist who supposedly brought the girl over to Bieber.

Now all of this can easily make a girl jealous; especially when reports come out hat your ex-boyfriend already had sexual intercourse with another girl, Milyn “Mimi” Jenson, just weeks after their break-up. But Gomez just doesn’t care, she’s so sick of seeing Justin’s name wherever she goes – whether it’s in magazines or even fans asking her if she’s still going out with him. “Justin is just trying to make her jealous, and even though he’s everywhere, she doesn’t care or buy it,” a source said.

The most disrespectful thing about this all is that Justin feels that when he’s single, he can do whatever he wants – which is true, but don’t go crazy when the break-up is still so fresh. He supposedly wants to get back with Gomez, despite all of the things he did to her during their split, – he has made her offers such as fly around the world him as he goes on tour and even offered to take her on a luxurious get-away trip on his private jet, but even those things are not impressing Selena.

“She doesn’t want to see him. He even invited her to tour with him, go on vacation and everything, but she said no 100 times. She’s bored and is dying to move on from him and wants to grow on her own as not just his girlfriend.” And her way of getting back at Justin is… to find a guy herself. Yup, according to reports, Selena is smashing Aussie actor Luke Bracey who she attended the Golden Globes after party with. The two became good friends and since Selena was single, she might aswell see where her new relationship takes her.

“Selena’s like a cat who ate the canary,” a source said. “Luke is older, hotter and so much more fun than Justin. Her friends, like Miley Cyrus, have told her that she’s onto a good thing, having an Aussie boyfriend. They’re turning into the must-have accessory for Hollywood’s girls.”

Who needs Justin when you can have a mature Aussie boyfriend?