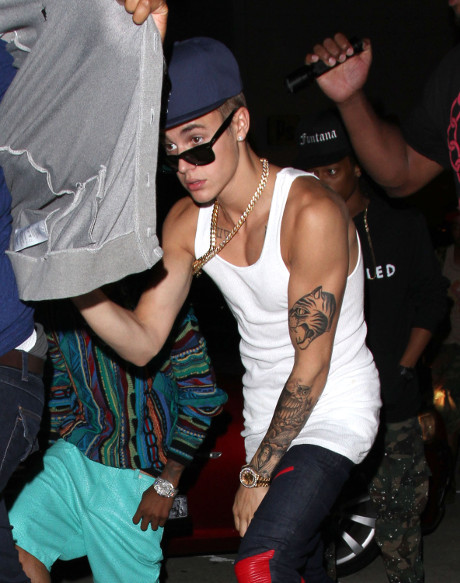 We thought Selena Gomez was done with her ol’ pal Justin Bieber, but she apparently can’t stop hooking up with the young pop star. Her family, who’s not fond of The Beebz, wants to put an end to their hang out sessions — and they reportedly staged an intervention to purge the crazy pop star from her life! News of this alleged intervention comes from an exclusive reporting by Life & Style.

A friend of Selena’s told the magazine that “Justin was a really bad person. They said she has to get rid of him from her life, otherwise they can’t be a part of her life — her new baby sister included. There were tears from everyone and Selena was devastated. It was a moment of weakness,” the friend says of the July 27 hookup that spurred the intervention. “She promised her family she wouldn’t see [Justin] again. It’s going to be tough for her, but she wants to break free this time.”

If Selena’s family really did stage an intervention, well, we wouldn’t be mad about that. Justin Bieber has been acting beyond crazy lately and Selena Gomez doesn’t need all that weird, rebellious energy in her life. She seems relatively grounded, and has a lot of talent, so we think she should find herself a new man. But why is it she can’t seem to stay away from The Beebz? Does she just need a bad boy in her life?

Let us know why you think Selena Gomez can’t get enough of that Bieber hair and drop-crotch pants. And, if you’re feeling particularly adventurous, give us a few names of who you’d like to see Selena Gomez date next! It’s time for her to move on . . . .