Selena Gomez to Reveal Every Single One of Justin Bieber’s Cruel-Hearted Ways in New Song! 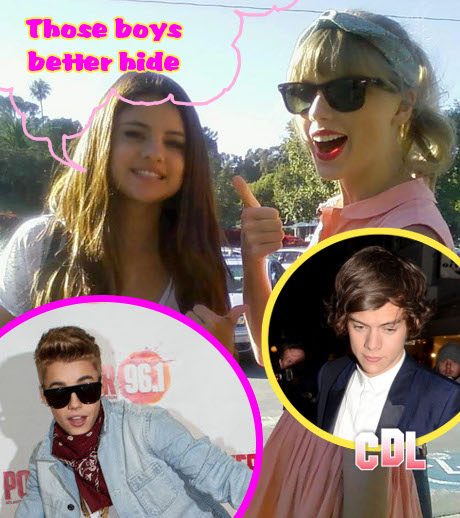 Selena Gomez just might be taking some breakup advice from her pal Taylor Swift. What’s the best way to cope with a sudden journey into Splitsville? Write a song of course, as our loveable Break Up Maven T-Swifter would say. It’s quite simple, really. According to a lot of rumors buzzing around the Celeb World, Justin Bieber was a total buttface to Selena during their time together as a couple.

Selena was spotted recently heading to the recording studio and beginning another collaboration with Rock Mafia, the production team that brought us the hit “Love you Like a Love Song,” and people can only assume that she’s grabbing that microphone with revenge on the mind.

Hollywood Life has a source that confirms Selena is definitely getting the let’s-trash-Justin-Bieber music machine working. “Justin was so mean to Selena that she can’t wait to spill all the s**t about him in her new songs,” the supposed friend says. “All his flirting and all his…bulls**t are on the table. Her fans will be shocked about how much of a bada** she can be when she’s out for revenge.”

Yikes! Yowza! If this friend is spilling the truth beans, then I think Justin Bieber better be afraid. Very afraid. Taylor Swift is already hard at work on her songs about Harry Styles, so maybe these two music starlets should get together for a slam session. Whose songs do you think will bring more angst, more pop, more fire?

Taylor Swift’s songs are always very clear as to what they’re attempting to express — and whom they are trying to express to. But they always seem to be light-hearted for the listener. And fun, that’s why people listen to her music. But with Selena’s break up music action….Who knows what her fans will get? I think Selena has the potential to go a lot darker than Taylor Swift, and it will be interesting to see how many bruises Justin Bieber’s heart will incur after she releases those lyrics.