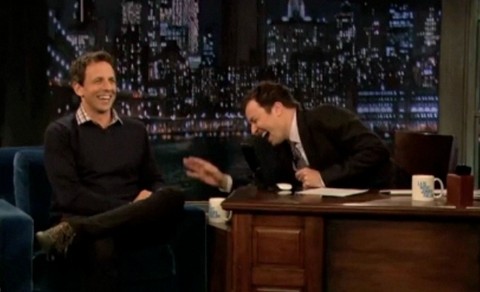 NBC has generated a whole lot of press these past few days as speculation has run rampant about the state of their late night programming and how the network intends to really flip the ratings around. Rumors have been swirling about the fate of several NBC late night stars ever since The New York Times published an article on Wednesday saying that a major shakeup is in the works. It’s pretty much a done deal that Jay Leno will be exiting The Tonight Show by Sept. of 2014, when his current contract expires. Jimmy Fallon is said to be taking over as host and the show itself will be relocated back to NYC where it held court for years. It has been filmed in L.A. As a convenience for Jay but now work is said to be already underway to create a brand new studio for Jimmy at 30 Rock.

While a contract hasn’t been signed yet, all sides are said to have an understanding of how this will go. Jay was able to block being replaced in 2010 but this time around he would have more than an uphill battle. NBC Universal is now owned by Comcast and that company is known to be extremely strict when it comes to decision making. If Jimmy leaves his current show then that means that NBC is in need of another host and word is that Seth Meyers is being groomed for the spot. The Weekend Update star is a top pick by producer Lorne Michaels as well as Jimmy. They think he can hold his own in late night television and since Lorne is at the helm of things I’m betting that what he says will ultimately stick. According to Page Six,

“Lorne Michaels wants Seth to take over from Fallon. It would be perfect for him. Tina Fey’s name had also come up, but she has said she was too busy to do it.”

Do you think that Seth would be a good replacement for Jimmy? He is a long-standing SNL favorite so if he takes the job I’m sure he would bring a bunch of built-in fans with him.

Tell us your thoughts on this whole NBC shakeup in the comments below!