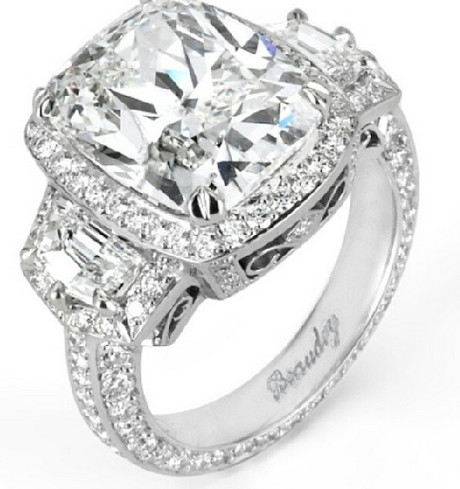 Golnesa “GG” Gharachedaghi, of Bravo’s Shahs of Sunset has always been known for her bold and impulsive behavior (ie: attacking her co-star, Asa, or threatening to cut her sister, Leila). She seems to act just as bold and impulsive when it comes to her love interests.

Earlier this year GG and her fiancé and co-star Omid called it quits, and as a parting gift she received a shiny restraining order from him. Now, less than ten months later, it has been revealed GG has a new boyfriend, business owner and Brooklyn native Dennis DeSantis.
So, who exactly is Dennis DeSantis? According to his Twitter, he is an entrepreneur, a philanthropist, an Eminem fan, and could quite possibly be addicted to tattoos.

Even though their relationship just went public at the beginning of this month, GG is ready to take it to the next level. Yesterday on Instagram, GG posted a picture of a gorgeous and HUGE diamond ring. She tagged new boyfriend Dennis DeSantis in the photo and commented, “I don’t think I’m asking for much. LoL! Come on @1dennisdesantis get on it!!!” GG may be a lot of things, but subtle is not one of them. Two fiancés in one year is a bit excessive, even for a Bravo reality star.

Ironically, last week on the season premiere of Shahs of Sunset, GG claimed she was ready to settle down, get married, and have babies. Will GG be able to bully him into marrying her, like she bullies all of her co-stars on Shahs of Sunset? The real question is, will Dennis be able to handle GG’s bullying and her fiery temper and knife collection? Or, is there another restraining order in GG’s future?