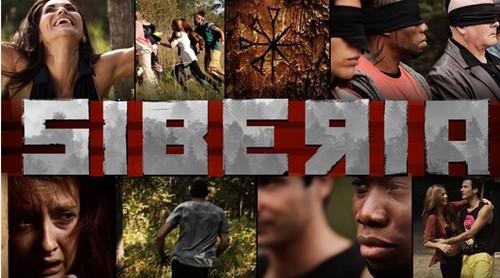 Tonight on NBC SIBERIA continues with a new episode called, “What She Said.”  On tonight’s show the remaining contestants become suspicious of one another and are shocked by a terrible secret.

If you have never watched the show when sixteen contestants from around the world are dropped off by helicopter into an ancient Siberian wilderness with only the clothes on their backs, they find themselves in an extreme survival adventure and social experiment with no rules or help from producers or the outside world in a “last man/woman standing” endurance competition.

On last week’s show very personal relationships begin to evolve and take shape among the contestants, but the bonds are altered by a mysterious phenomenon which lights-up the night sky. Sam (Sam Dobbins) counsels Daniel (Daniel David Sutton) in the affairs of the heart, Natalie (Natalie Ann Scheetz) displays mixed emotions to Anne-Marie (Anne-Marie Mueschke), Carolina (Joyce Giraud) reveals big news to Johnny (Johnny Wactor) and Neeko (Neeko O.J. Skervin) goes on the attack seeking to control the contestants from spinning out of control.

On tonight’s show the intensity of the contest heats up as real and surreal events create anxiety, mystery and jeopardy. Esther (Esther Anderson) proves her prowess as a strategic player while Carolina’s (Joyce Giraud) admission rocks them all. A major injury and a mysterious sighting in the woods create fear and panic, eventually sparking a manhunt for one of the group.

Tonight’s episode 5 of Siberia is going to be an exciting one that you won’t want to miss, so be sure to tune in for our live coverage of NBC’s Siberia at 10 PM EST! While you wait for our recap hit the comments and let us know what you think of Siberia season 1.

Everyone just found out that Carolina was a hired actress*** cough as if she’s the only one cough*** that was sent there to stir up drama. She claims she wants to go home now because the drama was got too much. Everyone is shocked and several of the guys are feeling used.

Sam thinks the ladies should get some more answers from Carolina. However they don’t feel like being in interrogation mode. Meanwhile the missing camera from the woods is found and taken by Sabina who has a secret supply hidden in the caves.
The contestants are trying to adjust to this life. All except Miljan who does his very best to escape all possible manual labor. Irene, who is working, is out in the woods with her crossbow ready to hunt when she hears funny noises.

Miljan’s only occupation is to go snooping. This leads him to get into confrontation with Sabina after she catches him going into her locket. She manages to scare him off but the strange noises manage to scare her.

Earlier Anne Marie was searching for Natalie and now they know what happened. Natalie quit.

Carolina remains the outcast to all but Daniel. He says it’s just a show and there’s no need to get worked up about her “defection”.

Irene and Miljan meet up in the woods. Irene thinks she found a nice piece of deer but it’s actually a trap. Her leg got speared. Literally like a kabob but not nearly as visually appealing. Jonny was trying to move on past Carolina (he was probably hurt that yes she was faking it) with Esther when they find out about Irene.

Everyone rushes to help Irene and they’re able to free her. But how badly is she injured. There was already someone killed so what will happen to Irene. As the team trying to clean up the imported syrup off of Irene’s leg they try and figure out what to do next. Red dye number 6 totally stains clothes.

Luckily the mysterious little girl that played an extra in the ring pops up. Maybe if Sabina catches her she’ll know what to do with Irene’s leg. Because Irene is refusing to quit the show.

Someone needs to push the button so that Irene can get sent home. Esther volunteers to “push da button” in the self sacrificing way a certain John did so many years ago. Whoever pushes the button gets sent home.

Esther pushes the button and they all have to carry Irene to the helicopter. The rules have changed and Irene is allowed to come back after her hospital visit. Only Esther leaves for good. At the last minute she turn back to the campsite to get something for Irene. Although the guys (Johnny,Sam, and Daniel) quickly find out Esther sent a trap. The guys are disqualified and the emergency button doesn’t work. With the jerky movements of the camera the guys are able to stage a very intense fight.
Over at the campsite Esther is pretty gleeful even though Neeko fakes disgust at her actions.

Sabina is still searching for Little Miss Blair Witch Project when she comes upon a skeleton left over from Bill Nye the Science Guy that just happened to have the same necklace she always wearing. Spooky but not nearly as creepy with Miljan carving in a tattoo. I guess no one gave him a dramatic washable one.

Carolina aka Joyce, Johnny, and Daniel go and try to find base camp in order to get the helicopter. They get there only to find no one there. The place is deserted. Now who’s going to touch up their make up for their scenes? Awww