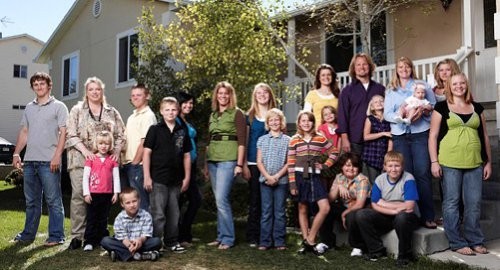 Tonight on TLC the Brown Family returns with a new episode of SISTER WIVES called, “A Wife Decides.” On tonight’s show Meri make a decision on Robyn’s surrogacy offer. Did you watch last week’s episode? We did and we recapped it here for you.

On last week’s episode the viewers took control as the Browns were put to the test answering all your questions. What do the teens really think of the family dress code? Which mom is the strictest?  We got all the behind-the-scenes details in this special episode of Sister Wives.

On tonight’s show in an attempt to move forward with their new life, the Brown’s celebrate by burning the bag Kody used daily to go between each house. Meanwhile, Janelle hits a plateau with her weight loss and Kody and Meri make a decision on Robyn’s surrogacy offer.

We will be covering Sister Wives Season 4 Episode 8 tonight at 9 PM EST so don’t forget to come back to this site for our full and detailed recap.  Make sure to refresh often to get the most recent details.  While you wait for the recap, let us know how excited you are about the new season of Sister Wives.

RECAP: The kids are excited. Especially the younger the kids. They can’t help wanting a new a baby to join the family but they know Janelle and Christine are done leaving only Meri and Robyn to have more babies. Still they lead to want Meri more to have a baby. She did only have the one child.

While Meri is still pondering the question of should she have another child? Kody on the other hand is making a present for each of his wives. He’s creating a piece of jewelry for each of them. He knows that his wife could get jealous of the other’s present so he’s putting in a lot of energy to make each of them unique. However when it came time to think of something for Meri, something inside of himself compelled him to say do. He claims he would never have given her dog necklace but that was in his confession made after the fact.
First thing first before he could gave any of them their gifts Kody did burn his notorious duffel bag. Why waste time burning something that can be used later? The bag was what he took his stuff in as he visited each of the wives home. Luckily no one was harmed during the fire Sister Wives closet has gotten a new opportunity. They were approached to deal with a casino. They’re jewelry and knick knacks would be put inside the gift shops. In one aspect their religions frowns on gambling but in another the people at the casino won’t judge them. In sin city of all places they’ll find strange camaraderie with people being more opened to a polygamist family. All the wives are on board but Janelle still wants to spread her own wings with real estate.

That has her focus now. That and losing weight. She has been losing inches here and there but her weight has stagnated. She becomes entirely obsessed with her weight that her trainer knows she needs more than his reassurance. He sends her to a nutritionist. At first she’s intimidated to meet with such an attractive woman but she does get the help she needs. Like she knows that she might be regaining thee weight with the way she’s been eating. That means a lot of things have to change in her kitchen.

Before they officially come to a decision to have a baby Meri needs to know Kody’s opinion. As of yet he hasn’t told her what he feels until now. Now he admits his gut hadn’t decided to do. It was one thing if they came about it naturally but the fact it didn’t happen like with Mariah make shim thinks its God’s will. He wants to sit on it.

Meri is hurt although she didn’t tell Kody. She wonders what kind of relationship they can have now. It won’t be like what he has with the other wives and how is she going to Mariah. Her daughter has dreamed of being a big sister for the longest time.

It’s only when she is with Robyn does she admit what she truly felt. It seems Meri wanted to say yes to another baby. She never got around to it before his own confession. If it only her, Mariah, and Kody then she wouldn’t feel like a empty nester but there are three other wives and lots of small children running around. That is what’s making her ache worse.

Next week the wives participate in a panel questioning. Christine’s aunt, someone whose completely anti, will be one of the women on the panel.