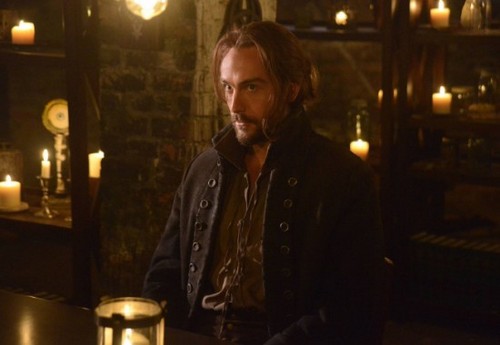 Tonight on FOX their new mystery-adventure drama SLEEPY HOLLOW continues with a new episode called, “The Sin Eater.”  Tonight’s show opens with Abbie and Ichabod enjoying a Sleepy Hollow baseball game. According to Abbie baseball stands for three things: tradition, teamwork, and the American Dream. Abbie teaches Ichabod to yell at the umpire, and justifies it as practicing democracy and the freedom of his speech. Abbie promises to take Ichabod to a Mets game one day. The game ends and Abbie and Ichabod part ways.

Ichabod visits the gravesite of his beloved wife Katrina Crane. While he is paying his respects he is shot in the neck with a dart, and kidnapped by an unknown man in a suit.

On her drive home Abbie goes into a dream state, and envisions herself in an abandoned house. The creepy house contains a nursery with a voodoo doll in a stroller, and the infamous headless horseman chases her wielding his axe. She runs into another room, and stumbles upon a bizarre circle of veiled women chanting. Katrina Crane pays her a visit, and says that the house they are standing in used to be her and Ichabod’s home. She reveals to Abbie that Ichabod has been abducted. She thinks Ichabod’s abduction is related to the headless horseman. Katrina tells Abbie that the “Sin Eater” will be able to reverse the blood tie between Ichabod and the Headless Horseman. She instructs Abbie to find the “Sin Eater” before sundown, then disappears. Abbie wakes up from her dream state and barely escapes a head-on collision with a truck.

Abbie pays her sister a visit at the mental hospital, and asks her for help in finding the “Sin Eater.”

Ichabod awakes from the dart that was shot into his neck, and finds himself in a candle-lit room with unfamiliar men in suits. Crane recognizes his captor as JR Rutlidge (a descendent of the free masons), and accuses him of practicing free-masonry. His captor is quizzing him to see if he is really Ichabod Crane, or a shapeshifter imitating him. He asks Crane to describe a moment that happened in the 17th century, Crane describes the moment perfectly, via a flashback, and coincidentally it is the same moment he met his late wife Katrina.

Abbie and her sister are working hard researching the “Sin Eater.” They learned that a “Sin Eater” can reach into the human soul and suck out all of their sins, ridding them of evil, and sanctifying them. Abbie remembers that Katrina used the words sanctify when she was visited by her ghost. Abbie’s sister has heard stories of one “Sin Eater,” but he has seemingly vanished, there are no more records or sightings of him.

Crane is still retelling the moment from the 17th century. He is interrogating a man, Arthur Bernard, about the whereabouts of a man named “Cicero.” He was called away from the interrogation to attend an execution of three men who committed treason. He also sees Katrina at the execution. Crane is not impressed by the execution and tries to tell his Colonel it is a bad idea to do so in public. It is also revealed that one of the men being executed is Katrina’s first husband, and the father of her son.

After the execution Crane follows Katrina into the woods and apologizes for the man being murdered in front of his son. He introduces himself to Katrina and the pair shares a heartfelt conversation about destiny. Ichabod reveals to Katrina he has heard tales of a war between men and demons. Katrina tells him he is “the one” and they need him and his gifts for the war against demons.

Abbie and her sister are still searching for the “Sin Eater” by scouring visitor logs of prisons. The “Sin Eater” used to visit inmates and sanctify them. Abbie reveals how much she cares about Crane, and wants to help him. Abbie realizes the reason they can’t find the “Sin Eater” is because he uses dead inmates’ names as aliases. She is able to use his aliases to track down the “Sin Eater’s” address.

Abbie and her sister are able to locate Henry Parrish AKA the “Sin Eater.” He says he is unable to help her though, he no longer sanctifies people. He says that he lost himself taking on everyone else’s sins. Abbie reveals that one of the four horsemen of the apocalypse is linked to her friend Crane spiritually, and that Parrish is the only one who can save him. Abbie grabs Parrish and he has a vision, he can see where Crane is being held captive. He tells Abbie and her sister that Crane is being held underground, in a tunnel, with masonry symbols on the door. He refuses to help her save Crane though.

Abbie and her sister begin searching underground tunnels in Sleepy Hollow in search of Crane. Crane is still being interrogated by the masons.

Crane revisits his 17th century flashback, where his Colonel is instructing him to take a man out in the woods and execute him. The man, Arthur Bernard tells him that if Crane kills him then he is losing the battle against demons, he references Crane’s talk with Katrina. Crane realizes the man is Cicero, the one he has been looking for. Bernard tells Crane to find George Washington and Katrina, and she will tell him what to do. He lets Bernard go, but his Colonel appears in the woods and executes Bernard anyways. Afterwards the Colonel accuses Crane of being a “traitor.” Crane delivers a fatal blow to his Colonel with his sword, but instead of dying his Colonel transforms into a demon. Just before the demon is able to finish off Crane, a group of men on horses interrupt the slaying. Crane staggers to Katrina for help.

Crane believes that his sin was allowing his Colonel/the demon to slay Arthur Bernard, and that he is still carrying the weight of that sin today. The masons are satisfied that Crane is truly himself by his retelling of events. The masons reveal that the ledger they are quizzing him from was his wife Katrina’s, and although she was a witch, she was also an ally of the masons. However she betrayed their trust by stowing away Crane’s body after his death and refusing to reveal its location to the masonry. The masons believe that Katrina knew all along Crane was linked to the headless horseman and that is why she hid his body. They have been searching for his body for hundreds of years so they could murder him and simultaneously murder the headless horseman. The masons want Crane to kill himself so that the horseman will also die.

Abbie Mills and her sister are getting closer to Crane’s location. They locate the masons and Ichabod Crane. Crane reveals to Abbie that he is not in danger, the masons are his brothers. Crane tells Abbie that in order to stop the Headless Horseman he must die. Abbie tells Crane she will not allow him to kill himself, she reveals that she spoke to Katrina and she has to take Ichabod to Henry Parrish to be sanctified. She believes that Parrish can break the link between Ichabod and Horseman, and that Crane doesn’t have to die. Crane is adamant that he has to kill himself. He asks Abbie to leave so that he can do the deed, but she insists on staying with him while he does it. He chugs a cup of poison right in front of her.

Henry Parrish (The Sin Eater) arrives seconds after Crane takes the poison. Parrish instructs Crane to put his hand on the table so he can clean the poison and the sins from Ichabod’s body. Parrish tells Crane that as long as he carries sin in his heart, then the Headless Horseman will continue living. Parrish helps Ichabod summon Arthur Bernard, the man he let die in the woods in his flashback. Arthur Bernard helps Ichabod forgive himself for his death, and tells him to let go of his guilt and the Headless Horseman won’t be able to ride anymore. He tells Crane to repeat after him: “I purge the wicked from my blood, our spirits severed, my soul sanctified, death leave me now. I command you.” The room shakes, glass shatters, candles flicker, and Ichabod is cleansed. Abbie runs into the room and hugs Crane, ecstatic that he is alive and sanctified. Henry Parrish reveals that the bond is broken between the Headless Horseman and Crane.