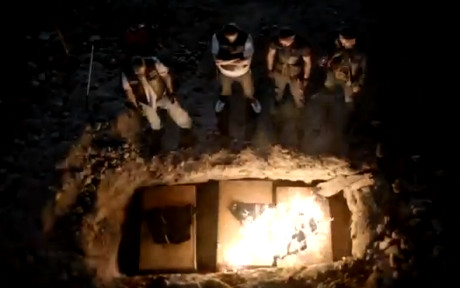 Tonight, FX’s dark-around-the-edges drama, Sons of Anarchy, returns with an all new episode entitled “Wofsangel.” During tonight’s episode, we can expect to see the arrival of actor Robert Patrick, who will play the president of the Sons of Anarchy San Bernardino charter. We’re getting psyched for tons of action on Sons of Anarchy season 6 episode 4. Did you watch last week’s episode? If not, don’t you fret, we recapped the show for you in full — CLICK HERE.

Based off several spoilers, we’re thinking the body count will rise significantly by the time this episode finishes, and some have started to worry about Tig’s fate. However, judging on some of the photos released, I think it’s safe to assume that Tig will survive his encounter with August (which we saw last episode) and make it out A-OK — or, erm, at least alive.

Make sure to watch Sons of Anarchy “Wolfsangel” tonight  Oct. 1 on FX at 10 PM ET/PT. While we can expect many things to happen on tonight’s episode, we’re most looking forward to seeing how this gun deal with the Irish continues to develop. This show is rooted in its darkness and violence, and we’re always interested to see where those energies lead our fave characters. Which characters should we be worrying for in the upcoming episodes of season 6?

Make sure to leave your thoughts and comments in the section below, and don’t forget to come back here TONIGHT for our LIVE recap!

RECAP: We see Wayne waking up and then all of sudden he is pulled out of his trailer by some masked men.

Tig goes to see Jax and tells him the prospects never showed up with the truck last night, Jax says it’s his fault; he’s just got so much shit going on. Tig then asks Jax if he is good with him and Jax says yes.

Cops are asking questions about Erin, her dead body was found. One of the escorts and they ask Nero if he knows anything about it. Apparently witnesses seen a Ford pickup leave the body.

Jax goes to see a guy and he wants to be hooked up with the Irish gun distribution.

Gemma heads to Wayne’s trailer, she calls out his name but doesn’t see him anywhere. Gemma goes into the office and looks through the window, she sees Wayne hanging from something and his chest is all cut up. Jax shows up with Tara and Tig, Wayne seems to be coherent and tells them that it was three guys that did it to them. Jax assures Wayne that he is going to find who did this.

Tara bandages up Wayne and tells him that he needs to get a tecna shot. Wayne asks Gemma what would have happened if he had the boys when those guys showed up. Gemma says they weren’t there and that is all that counts.

Gemma has a phone call, it’s Wendy and the lawyer wants her to sign off on the guardianship; they plan to meet later.

Nero is at the station, he claims to be with Gemma the whole night before and has nothing to do with Erin’s death. Nero asks the sheriff if he is working with Lee, he came by his place the day before talking to some of the girls and roughing up some of his guys.

Gemma is with Wendy, she tells her that Tara knows she came to her for help. Wendy says that Tara scares her, like she is completely disconnected.  Gemma finds out that Nero is at the station, the cops think he had something to do with Erin’s murder.

Jax goes to see Darby who doesn’t want to answer any questions. Jax wants him to bring him to the entrance of the enemy to settle his score. Chibs tells Darby if he doesn’t help, they will use him for bait. Jax tells Tig if it look dicey, get the hell out.

Tig drives up to this house and says that he is looking for Eddy who is apparently looking for new crew. A pickup pulls up and more guys get out to help Tig, they grab what they want and head out.

Gaelan goes to see Jax who tells him he cannot take any more Kg-9’s. Gaelan tells him that he is not getting out of guns. Jax tells Gaelan that he wants out like his old man. Jax then says that Gaelan is just about killing people with their catholic bullets, Gaelan goes to hit him.

Gemma shows up at the station and tells the sherrif that Nero was with him every night and had nothing to do with the murder.

The sherrif has incriminating evidence in Nero’s truck and he knows it was planted there.

Clay has a visitor, it is Lee. Clay tells him that he missed him. Lee says first Jax framed him, then he is obviously keeping him safe in jail.  Lee tells Clay that he is his only friend and should just sign the affidavit.

The Irish showed up at Oswald’s with the guns. Jax heads out there with the guys and finds some blood stains on the ground. Inside, they find two jackets and hands, with tons of body parts; two of their guys have been chopped up.

The Sheriff is going over Lee’s file, he heads out of his office and tells Nero that he can go but he is keeping his truck a little while longer.

Jax tells Cribs that they need to settle the score. Gemma and Nero are on the way home.

Lee goes to see Clay again and wants to know if he has had second thoughts to sign the papers.

Jax got his men all rounded and armed with guns, he rides off and tells them “let’s do this”. They drive right up to the house and just start shooting, killing tons of guys. Jax tells Tig and the guys to wipe down the guns, make it look like an internal fight and burn it all down.

Lee goes back to see the guy in the infirmary and tells Otto that Clay is a traitor and if he gives him something against Clay, he will make his time there very comfortable. Otto can’t write because his hand is strapped, he asks to have it unstrapped, Lee does it. The guy writes down something about Lee’s sister, then he pulls out the weapon that Clay gave him and kills Lee.  The cops come in and kill Otto, both are dead.