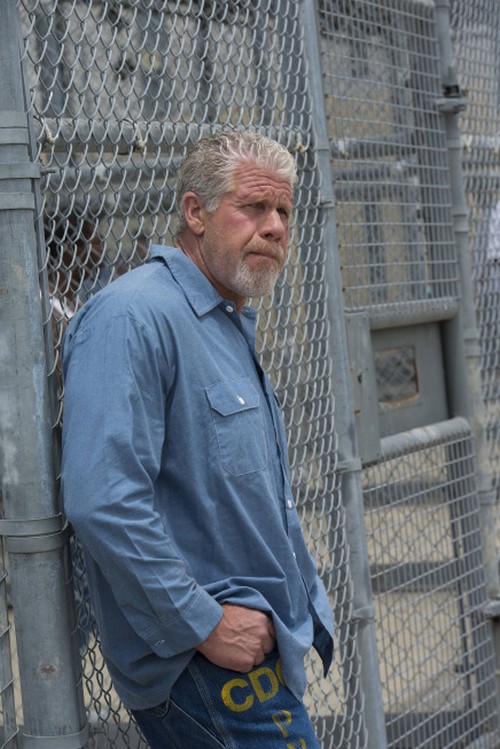 On last night’s new episode of Sons of Anarchy called, “Poenitentia,” there were a lot of questions but not many answers.  The show opened with the D.A is holding a press conference informing everyone that they have no leads on the gun what so ever. She also tells everyone she can’t find the the child’s mother or boyfriend ( how I’m going to miss the tasty treat that was Dave Navarro on this show).

Meanwhile Toric hears someone pull up outside his hotel room. Toric accidentally shoots the hooker he gave his hotel room number to last week right In the gut. Toric sees that it’s the D.A. Then he winds up doing what any man that made the terrible mistake of shooting a hooker would do, he apologizes to the girl and then finishes her off with his gun and a pillow (remind me again why he doesn’t just work with Jax and company. He obviously has the same pillow fetish that they do). Anyway the D.A gives him the awesome assignment of locating the mother and boyfriend of the little boy. Toric replies with a copy that. This is of course after he meets them outside (dead hooker in his room and all). This job is right up Toric’s alley seeing as how he wants the Son’s punished and taking down Nero would help with that.

Jax goes to visit Roosevelt and asks him if he knows anything about the Torilay (it’s my new name for Toric and Clay )connection. Roosevelt tells him he doesn’t but since this show is full of lies and deception I’m not buying it.

Tara drops the boys off at TM she has a appointment about her hand( if hand is code for pregnancy).

Jax finally graces Clay with his presence. Clay tries to get on Jax’s good side (which is damn near impossible, not because Jax hates Clay but because that side of Jax is disappearing by the second). Jax like Gemma can sense something is up, only difference is he knows who and what. Jax walks over to the mirror that Toric is watching them through and apologizes for Toric’s sisters death and makes it clear if he comes after Tara there will be hell to pay. After Jax leaves Torilay talk. Toric tries to get Clay to sign the papers one last time. Clay will not. Toric then goes on to say how ironic it is that Clay has committed all these murders and yet it’s the one he didn’t commit that is going to get him. Back to gen pop Clay will go.

Jax arrives at TM and sees Gemma with the baby and ask where Tara is. Gemma tells him she is at a doctor appointment about her hand (wink wink). Jax and the club also have a nice little meeting upon which Jax shows he is in fact a little baby by throwing a fit when Chib’s suggest he call Bobby. Jax refuses, but that’s cool because Bobby is out and about collecting more guys for his own little biker clique. Did I mention that there are only six guys at the table with Jax? unbelievable.

Toric has two of Nero’s guys tied up and is using their teeth to open beer bottles. Toric wants them to tell him where the mom and boyfriend are . They refuse. That’s fine with Toric he brought more beer (when what he actually needs is a f**king shovel).

Wendy shows up at TM claiming some guy beat the hell out of her and that she needs to talk to Jax. Gemma tells her she will handle it and for Wendy to drop by Gemma’s house later.

Jax and company go to have a little chit chat with Amir on his boat. Amir is pissed because he thinks Jax killed his brother Kia. Jax assures him he did no such thing. Amir suggest that perhaps one of Jax’s boys decided to venture out on his own. Jax has the look of someone who knows who did a bad bad thing (Tig). Barosky tells Amir to get on his boat and leave and never come back.

Back over in gen pop Clay is about to get his in the form of three big black guys. Clay tells them to just do it. They comply and beat the hell out of him. Just when you think Clay is finally going be finished off the three guys offer him another choice (I swear Clay has nine lives).

Tara comes back to TM to get the boys and is confronted by Gemma who wants to know if she has done anything about making Wendy the guardian of the boys. Tara is not interested in having that convo because she has more pressing issues she is pregnant (eight weeks to be exact). Gemma is thrilled and hugs her. Tara looks like a deer caught in headlights. (More like one that got ran over).

Back at the bakery it’s just Jax and Tig. Jax ask Tig if he let Kia go. Tig lies and tells him that he absolutely did. (He sure did let him go, right into the big sleep and then Tig decided to go number one on him). Instead of pushing Tig further (even though they both know he is lying) he sends him to get the equipment from the studio to put in their warehouse. Tig leaves to do just that (come on Tig by now you should know when Jax is setting you up).

Clay is walking around the prison yard looking rather well for a man who just a few mere moments ago was beat within a inch of his life (but I digress). Clay would like to speak with another gentleman who is apparently a gang banger named Carson. At the very moment Clay gets close to him one of Augusts men ( the lead Clay beater from earlier) starts a riot. Clay takes advantage of the riot by stabbing Carson in the neck with a shiv. (So I guess Clay is working for August Mark’s now),

Toric is doing what creepy vengeful crazy guys do and is removing a hair and clothing sample from his dead hooker. Toric assures her that he will make her death matter. (Toric is such a sweet talker. Insert eye roll and look of disgust here).

Jax goes in search of Colette and finds Barosky helping her with her laundry (nice guy that Barosky, helping her out so Jax will have time to handle other more important things).

Which he does when he has a meeting with August. They talk business for a bit and them August ask Jax about their other business to which Jax hands over a paper (which gives us our WTF moment of the night) with Tig’s whereabouts on it ( because never let it be said August doesn’t get his Mark. See what I did there?)

Wendy is at Gemma’s . Gemma hands her a gun (because that’s obviously a smart thing to hand to a woman who hates your son and his wife).

Clay gets put in solitary confinement for 99 years ( no wait that’s Bugs Bunny). Clay is in for the night. One of August mean slip him a blade to protect himself (from what the walls?)

Colette is trying to get a hold of Jax who pulls another baby moment and doesn’t answer the phone (your married for pity’s sake, get over it, help your wife with her laundry).

Toric stalks Nero all the way to Gemma’s house and when he gets there he puts his baggy of hair and clothing from his dead hooker in Nero’s car. Elsewhere Roosevelt finds the dead hooker.

Wendy is at home wiping the make up off her neck (Gemma,Gemma,Gemma what have you done?)

August walks in with his men much to Tig’s surprise. (Damn Jax and his bike straight to hell).

It’s been hinted that another major character dies this season. Think it’s going to be Tig?

I’m beginning to think the club was better off in Clay’s hands.

Check out a sneak peek of next week’s episode below!