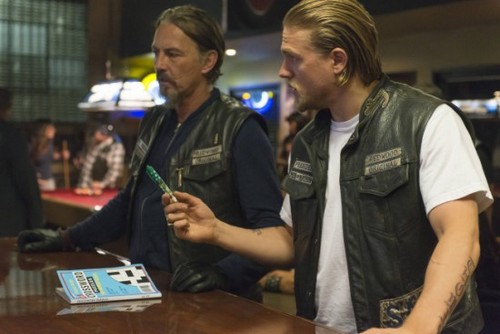 On last night’s new episode of Sons of Anarchy called, “The Mad King” the show opened with Jax and Chib’s are sitting outside of a well known Irish hangout and so are Tig and Juice. They are waiting for Connor or Galen to show up. When that doesn’t happen on a fit of anger and desperation Jax decides it is bat to pull one of their associates out of his van and ask him where they are at. When that fails to work for Jax he decides that violence is the answer and stabs the guy in the hand, it works and the guy sings like a bird (Irish drinking song style naturally) and tells Jax he was supposed to pick Connor up for extradition the next day.

Meanwhile that pesky D.A. Is busting Roosevelt’s chops to bring Nero to his knees as a way to get to Jax and company. She also has plans to use Tara to her benefit because she is bad until she does good by her. Ummmm ….I think maybe she forgot what happened to Toric last week and how her ass is the one that put it in motion by harassing him…some people never learn.

Jax heads over Gemma’s way. Gemma informs her son that she wants no bodies, no time, no place, no where (I think she even banned him from putting out Halloween decorations). Jax gives her the whatever you say mom drill and heads out with Nero.
Jax makes a pit stop to see Tara who makes up some story about how all the stress is affecting the baby she is in her first trimester with (I’m still not buying this whole pregnancy thing, it just seems to convenient).

While on the way to meet that skeeze Barosky and “she who needs help with her laundry” Colette, Jax and Nero promise each other that they are all about making the escort service their main business and keeping violence out of their lives. (For a minute there I thought they were going to cement it with a pinky swear).

Barosky does some legal maneuvering and gets Roosevelt to bug off. Then he tattles to Jax and Nero about Roosevelt spying on them. Jax tells Barosky to kindly calm the f down because Roosevelt has nothing on them. Well nothing if you don’t count that dead escort that worked for Nero.

Tig and Chib’s go to pick up Jax. They all head over to pose as Connor’s ride to the airport. Connor buys it for a minute or two. By the time he catches on its a little to late which Jax makes perfectly clear when he rams him into a palette of beer. Then to add insult to injury Jax uses his phone to call the Irish Kings and try to make a deal. Jax tells him them he doesn’t want anymore bloodshed and that he will get them in touch with August Marks who can triple their gun trade business. They say they will think about it. Galen happens to have been standing there riveted to every word and tells his bosses that the Sons can easily be replaced as long as they have Clay.

Gemma surprises Wendy at work who quickly hides her fake bruise with a scarf. Gemma explains the lock down situation and tells her she thinks this will make Tara step up her plan to get the boys away from Jax. Gemma tells her she wants a copy of the will Tara gave Wendy so she can show Jax the double cross Tara is pulling on him. To sweeten the deal Gemma throws in some pictures of Abel. Wendy wonders why after all these Gemma accepts her. Gemma informs her acceptance has nothing to do with it she is just tired of fighting with Tara all the time. (Cold as ice that one).

Jax gets word that Clay’s lawyer set up a conjugal visit for Clay and Gemma. Which is apparently biker speak for Clay has some 411 he would like to pass on. Chib’s is graced (by graced I mean voted for)with the honor of telling Gemma.

Nero gets a one on one with Roosevelt and ask him why he is still all up in his business over the escorts murder. Roosevelt tells him that it is the opinion of that pesky D.A. that SAMCRO is written all over the school shooting and she won’t rest till she has all their asses for it.

Tara’s lawyer gives her the info that Toric’s murder also has SAMCRO written all over it and this is very bad for Tara and could get her thrown back in jail. Wendy chooses this exact moment to show up (and her outfit is hideous) to tell Tara she is having second thoughts about all this lying she is doing ( so who’s side is she on again?). Tara begs Wendy to continue the charade and sweetens the deal by promising Wendy she can see Abel very soon. (What in the hell is Wendy up to?)

Gemma heads over to prison to see Clay and has plenty of money to get in. (I didn’t realize you had to pay for conjugal visits just like you pay for the no tell motel). Clay tells Gemma that the Irish want to break him out and have him head up their illegal gun trade in Belfast. Clay knows that this sends Jax up shit creek without a paddle and wants Gemma to make sure that Jax knows. Gemma goes to leave when to guards walk in and demand that they have sex in front of them for their sick pleasure. Gemma refuses (I swear this girl is either getting raped, forced to have sex, or the shit beat out of her).
When the guards start punching Clay she gives in. Afterwards Clay informs the two he is going to kill them. (Yeah right, more like thank them and pat them on the back).

Barosky is still whining like a bitch about Roosevelt. Jax tells him to grow a pair and everything will be just fine. Jax even assures him they will keep away from illegal activity.

Chib’s shows up with Gemma and informs Jax what a absolute f**king moron he is for suggesting the Kings go into business with August (they aren’t racially friendly). Jax tells Chib’s to chill and gives the Kings a call. Jax ask if they have considered the offer. They tell him they will call back at eight ‘o’ clock on the dot with a decision.

Gemma finds Nero and tells him that they need to talk and that she doesn’t want to keep things from him. (She tells him about her visit with Clay).

The sheriff gets the DNA from the truck and low and behold it matches the escort.

Inside the club Tara is putting Abel down for bed in the back office. Jax and Company are gathered inside waiting for the call from the Irish. Jax notices what is going on outside on the surveillance camera. They watch for a bit and then Jax tells them they need to gather in the meeting room for the call. Jax looks down and sees the green pen. Jax ask Chucky where it came from. Chucky tells him the delivery guy left it there. Jax wants to know what delivery guy. Chucky tells him the one that left the beer. Jax and Chib’s put two and two together and get four. They start telling everyone to get out of the club because of the bomb that Is about to blow. Tara ask what is going on and Jax has Tig get her out , but not before she tells him Abel is asleep in the office. Jax takes off after him and Jax and Chib’s get out in the nick of time. The place blows. Jax and Gemma just look at the destruction.

Wanna get a taste of next week’s episode?  Check out the sneak peek below, enjoy!