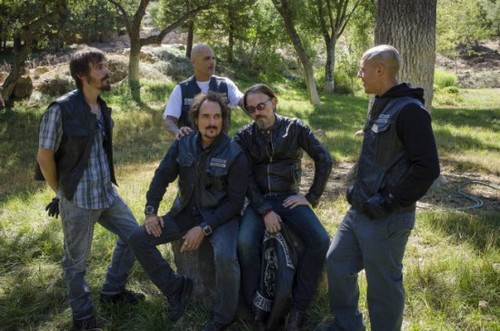 On last night’s new episode of Sons of Anarchy called, “Salvage.” The show opened with Jax and Chib’s are surveying the damage of the burned out club thanks to the Irish. Chib’s finds the gavel intact. Chib’s tells Jax that they will find a way to figure this out.

Roosevelt wants to know why the IRA would want to blow up their club. Jax ask him to please stay off his back and out of the way.

Gemma manages to get herself thrown in a cell with Nero. Nero ask her what he is going to do with her. Gemma tells him she knows he wants to get away from all this but that she can’t leave her family right and that she hopes that they can find away to stay together.

Jax goes home and ask Tara how the baby is. Tara tells him she has a ultrasound appointment (sure she does). Jax gets a call and excuses himself to take it. It’s the Irish they tell Jax that if he doesn’t deal they will continue to bomb. Jax has to make the deal happen and not take any of the money for himself. Hey also want Clay to do their dealing in Belfast. Jax agrees and tells them he will give Connor and the other guys back. Jax tells the Irish that he didn’t want a war. Chib’s tells Jax that he thinks they should keep Connor a few more days just to make sure the deal with the Irish is legit.

Gemma is brought home and she tells Jax that Nero was no help at all what so ever. Jax tells Gemma that he needs her to go see Clay and tell,him that Jax wants him to take the deal with the Irish. Gemma begins to cry and tells Jax that she is there for him. Jax also ask that Gemma not leave Tara alone.

The nasty D.A stops by Roosevelt’s office to make sure he does his job and nails Nero for the escorts murder. Roosevelt tells her he thinks Toric set Nero up.

Tara is at the hospital with Unser talking about her plan to divorce Jax. Meanwhile Tara staying true to her word is letting Wendy spend time with Abel.

Jax and the boys are heading north when they are pulled over by two dick cops. The ne cop tells Jax he isn’t allowed to wear gang colors. Jax tells him he isn’t. Juice gets in the cops face and the cop handcuffs him. The cop then shoots out Juice’s tires. Juice attacks the cop and then chaos erupts. Juice jumps on one of the cops bikes and they all take off. Rats van comes in handy when Juice jumps off the police bike causing it to wreck into the cops pursuing them. Juice tells them that those cops were dirty and nobody is after them. Jax hops off his bike and gives Bobby a hug. Bobby has brought a whole new group of bikers with him.

Gemma meets with Clay at the prison and tells him what happened to TM and that Jax wants him to deal with the Irish. Gemma then ask Clay to help her with the situation Nero is in. Clay gets pissed and gets up to walk out. Gemma makes it clear that he owes her after she was forced to have sex with him.

Jax has called a club meeting and is explaining to everyone why they need to get out of the gun running business and how it has never been good for them or the club. Jax tells him that their business is now pussy. (Escorts). The club members all agree with Jax.

Gemma is at the police station. She happens upon the D.A. when looking for Roosevelt and tells her that Toric set Nero up. Roosevelt reminds the D.A. that Toric was on her payroll so she better hope he wasn’t involved.

Roosevelt heads over to Toric’s hotel room. Upon entering he immediately notices the smell of bleach. Roosevelt also finds a cartels worth of guns. Roosevelt notices a rug on the carpet and when he picks it up he sees bullet holes. The D.A. walks in and Roosevelt tells her that the escorts murder is on Toric not Nero. She tells him she will believe it when he gives her DNA proof of it.

Jax calls to see how the ultrasound went. Tara tells him everything was fine. The call is interrupted by her lawyer who tells her the D.A is willing to give her full immunity if she flips on Jax and company and admits they were behind the gun that was used for the school shooting. Tara refuses.

Bobby reveals to Jax that he wasn’t trying to start up his on club but rather get more members for their charter.

A friend shows up at Nero’s place of work. She is a transvestite and has been beaten.
She tells Gemma she has known Nero since she was 15. Gemma hugs her and tells her everything will be ok and that she will help her.

Jax and Juice head to the impound to retrieve his bike and see a whole lotta motorcycles in it.

The D.A goes in the bathroom at the police station and washes her face off. She then take a her wig off. She looks in he mirror and psychs herself out. She runs into Tara on her way out and informs she will prosecuting her in three weeks.

Jax tricks the two dirty cops with a phony phone call and tells them not only is Juice taking one of the many bikes they have locked up but that he also expects them to apologize.