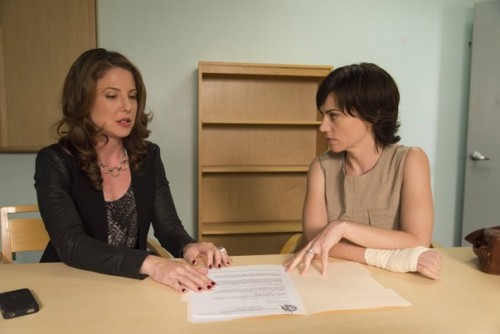 On last night’s new episode of Sons of Anarchy called, “Sweet and Vaded,” the show opens with Jax cleaning up the mess at TM. They set up shop temporarily at a old ice cream parlor. At the hospital Tara is getting a bag of her own blood. Margaret tells her to keep focused. Nero gets a visit from the D.A. she wants him to rat out the sons. If he does so he will walk.

Jax has the old table up and it’s good to go. Good thing to its meeting time. Jax tells the guys he is going to cut Connor loose and make sure the deal with Clay is good. They guys officially vote in Quinn, Montez, West, and of course Rat.

Jax and Chibs release Connor. Connor thanks them. Chibs tell him not to thank him because he wanted him dead.

Gemma goes to see Nero who tells her about the visit from the D.A.. Gemma who obviously has never heard of the saying “this may be a bad time” goes right on ahead and tells Nero about Venus and how her nephew Joey is with her mother Alice. Nero has a mini freak out and begs Gemma to have Jax deal with the situation A.S.A.P.

The D.A having run out of ideas on how to get Nero to flip goes to Roosevelt and tells him to sweat Barosky for information that she can use.

Lowen gives Tara a paper that Gemma will not be able to contest. Tara still will need Jax signature however. Tara ask Unser if he can help her to get a restraining order. (I can not believe he is going along with this.)

Barosky meets with the D.A, and Roosevelt and when questioned denies any connection to SAMCRO.

Venus, Gemma, Jax, Chibs, and Bobby are at Alice’s house. They go in and Venus ask for Joey. Alice flips out and starts calling Venus some pretty awful things. Alice’s boyfriend whips out a gun and shoots it off, a scuffle ensues during which Alice gets away with Joey. Jax is in hot pursuit of Alice, it’s during this car chase that Venus admits that Joey is in fact her son. Alice’s boyfriend is on Jax’s tail and starts shooting at them. Venus grabs a gun and starts shooting back. Jax decides to stop the car. Alice gets away with Joey. Barosky does Jax a solid and tracks down the license plate.

Margaret is with Tara and tells her its time. Unser shows up with the restraining order and ask her who it’s for (WTF? Doesn’t that have to be filled out before it’s issued?) Tara tells Unser in just a bit this will all make sense.

Jax and company find the portrait studio that Alice is keeping Joey at. They go in and find him drugged and a mountain of evidence proving everything Venus said to be true.

When Alice and her boyfriend show up Venus grabs Tig’s gun. Venus is all about killing the sick bitch. Somehow Jax talks her down and she drops the gun. Instead of taking it as a win and just walking away Alice decides to pop off at the mouth. Alice tells Venus how Joey is going to grow up hating her for being a transvestite and the life he grew up in and will eventually blow his brains out. It’s at this point that Jax has had enough and shoots her right between the eyes. Venus is relieved that Joey will have a chance at a good life after all. Barosky offers to do Jax another solid and dispose of the body.

Bobby is taking Gemma back to TM. Gemma tells Bobby she is glad that he is back. Wendy is there and she is freaking out. Wendy tells Gemma how she thinks Tara is going to make Margaret the guardian and screw her, Jax, and Gemma.

Gemma and Wendy find Tara in the cafeteria. Gemma is fit to be tied. Tara opts to get up and leave. Gemma’s bad judgement kicks in and she follows her. They get into a huge fight, Tara slaps Gemma. Gemma slaps her back. Then Tara puts on the best performance of her life and pretends that something is wrong with the baby ( you know the one that has never been there), she even uses the bag of blood she got earlier to make it more believable. Tara starts screaming for Jax. Security comes running in and Jax all of a sudden becoming psychic isn’t to far behind. The police question Margaret, Wendy and Unser, and since they are all on the same page they lie and say they saw Gemma attack Tara. The police take Gemma into custody and handcuff her.

The doctor at the hospital sends Jax out so he can “examine” Tara and then confirm she miscarried thanks to Gemma. Jax buys it hook line and sinker. Jax agrees and signs some papers , (the restraining order against Gemma?)

Venus puts Joey on a bus to Seattle. Tig is with her.

Nero is laying in his jail cell.

Margaret is with the boys and looks awfully damn pleased with herself.

If you are like me and cannot wait until next week’s episode, check out a sneak peek video below of Episode 8 of Sons Of Anarchy.