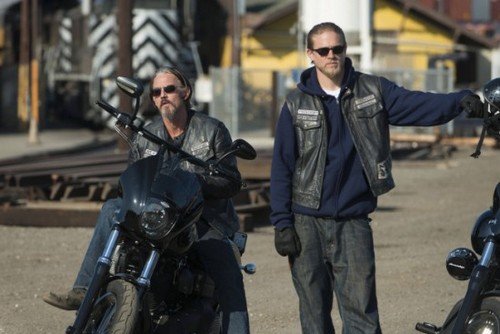 On episode 8 of SONS OF ANARCHY called, “Los Fantasmas,” Tara is laying in bed at home proving that she is the perfect little laying liar who lies. Jax being Jax which means stupid and blind when it comes to Tara and her BS offers to take the boys to day camp so she can continue to recover which in Tara’s mind probably consist of eating ice cream while finding a way to take Jax down. On that note Tara brings up Gemma and Jax reassures her she is gone for good thanks to Tara’s shady restraining order.

Gemma meanwhile is confused as to why in the world Roosevelt still has her locked up. Gemma tells him she didn’t do it , sure she smacked the conniving little bitch but she definitely did not kick her and make her miscarry her imaginary baby. Gemma also points out Tara is just doing this to keep her away from her grand kids. (Gemma has it all figured out, mostly because in another time in another place that would totally be a Gemma move.)

Meanwhile over at the club (aka the ice cream parlor) Jax is telling Chibs about what happened between Tara and Gemma. Apparently that shit was off the hook crazy. Bobby breaks up the story of the Tara/Gemma tussle of 2013 and shows him the local paper that insinuates that SAMCRO was behind the school shooting. Jax does a complete turned around manages to focus up and tells Chibs to get all the guys gathered up for a club meeting.

The D.A. is being her usual charming self and threatens Nero by telling him that giving up Jax and company is the only way he is getting the hell out of jail. She also tells him she will pick up members of his crew if they so much as blink.

Unser knocks on Tara’s door. When she lets him in Unser tells her he can’t believe what she did the day before and that he is a idiot for getting her a restraining order (I agree.)
Unser also calls her on crying wolf about the miscarriage. Tara admits it and explains it’s because she wants her children away from Gemma. Unser tells her it’s to bad she had to do something so wrong to do something right. Before he leaves he tells her he isn’t going to help her anymore.

Back at the ordered club meeting Jax tells everyone how the newspaper article is just the D.A.’s way of blowing smoke up their ass’s. Juice thinks Conner is a good guy now and will have their backs (how naive is this kid?) Jax closes by blowing some more smoke and claims to love them all (Really?)

Unser shows up at the police station and tells Roosevelt he is there to pick up Gemma and will be waiting downstairs. Roosevelt looks like he isn’t surprised by this one little bit.

Jax is with Chibs and some other guys when a car they have been watching rather intently decides to run over #3 for the Byz Lats. Mow him down would probably be more accurate. Chibs tells Jax to just relax and head on home that he will clean up the body. (I guess Tig should probably go get the bucket of water and a mop.)

Gemma is free ( can’t keep Unser waiting all day.) Gemma tells him she wants the truth the whole truth and nothing but the truth, she even promises not to go all turn coat on him. Unser tells her everything. Then he tells her that she has more hate than love in her and that is not a good thing.

Jax gets a call that informs him the D.A. is about to be all up in his business trying to find out who plowed down one of SAMCRO’s latest and greatest.

Wendy stops by to check on Tara. Jax informs her that if she knows what is good for her
she will never darken his doorway again.

Nero tells the D.A that as long as she promises his son will be cared for and close by he will make a deal and tell her where the gun came from. She agrees. Nero tells her he bought the gun off the street and that Matthew found it. Nero tells her he is responsible for the murders of those kids (the things this guy does and all for the love of Gemma.)

Tara stops by the club looking for Jax. Bobby tells her if she ever needs anything to let him know. Tara ask Bobby if the club will ever be legit. Bobby tells her they will take the direction that is best for the club.

Roosevelt gives the D.A. the blow to end all blows in the form of evidence that proves Toric killed the escort and that Nero did not. The D.A. is confident that Nero is going to deal regardless. Roosevelt being so generous with his blows gives her one more when he tells her he cut Gemma loose seeing as how he had no proof to hold her.

Jax and company find the guy who ran their guy down. It just happens to be the father of a kid that died in the school shooting. Jax being a father shows his soul isn’t completely lost and straightens a picture up and then apologize for the guy’s loss. Jax splits. Good thing because the cops are headed to the same place. The dad decides to stab himself in the neck before they get there, delivering another blow to the D.A.

Wendy tells Gemma she can do whatever she wants, and what Gemma wants is answers. Gemma ask her if the scheme was Wendy’s or Tara’s idea. Gemma then ask what Tara promised her. Gemma tells Wendy Jax is going to figure this all out and when he does Wendy would be wise to be on his side. Wendy thinks she is screwed no matter what direction she takes. Gemma tells her that isn’t so and that she will even keep Jax from killing her. Wendy gets the drugs out of her purse and tries to give it to Gemma. Gemma won’t take and tells her she needs to get rid of it herself if she wants to prove she can be a good mother.

Jax and Gemma have a run in. One that allows Jax the opportunity to tell Gemma she is a sick twisted bitch (very true) and that she needs to get it through her head that they are never ever getting back together and that she is dead to them.

Wendy is at home shooting up (probably with the Toric special.)

Speaking of….the D.A. tells Nero she is cutting him loose because it was Toric that killed the escort. She gives him a parting gift in the form of a envelope full of pictures of the kids that were killed.

Tara tucks the little ones in. Jax ask her if she can please find a way to let him back in. (I’m starting to think he was better off helping Colette with her “laundry”.)

Where in the hell has Clay been the past two weeks?

If you want a sneak peek video & synopsis of next week’s episode, “John 8:32” check out the preview of episode 9 below!

“Jax uncovers secrets that turn his world upside down.”