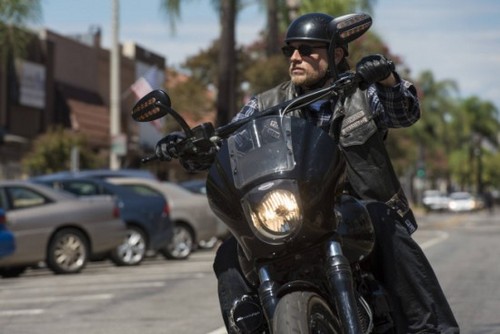 On episode 9 of SONS OF ANARCHY called, John “8:32” : “and you will know the truth, and the truth will make you free.”  Jax is looking at himself in the mirror (probably trying to see if he really is turning into Clay.) The little one starts crying and Jax leaves to take care of him.  Gemma is also up and about. She kneels down by her bed like she is going to pray. Nero wakes up and Gemma tells him how glad she is that he is home.  Tara comes into the kitchen and takes the baby from Jax.

Gemma is in her kitchen with Nero and tells him all about her throw down with Tara. Gemma also tells him she thinks Wendy was in on it. ( I just think Tara lined them all up and knocked then down.) Nero knows Gemma has lots of secrets. Gemma kisses him and tells him she loves him.

For whatever reason Jax feels the need to tell Tara that Clay is still alive and well. Jax also expresses his disappointment in the fact that he couldn’t keep her out of his mess of a life. Jax tells Tara he loves her. Tara looks indifferent.

The DA shows up at Roosevelt’s. Her visits have to be boarding on harassment by now. The DA is all business and no wig. She ask about the child’s father who killed himself last week. She wants Jax under 24 hour 7 day a week surveillance. When takes a piss she wants to know. Roosevelt is all surely you jest. She doesn’t jest. She ask if there is a problem, Roosevelt assures her there isn’t.

Jax is with the boys at the ice cream shop. Unser shows up and would like a minute of his time. Before Unser can get around to saying what’s on his mind a girl throws a rock through a window and sends glass flying. Unser explains to Jax she is Putner’s kid and she blames Jax and company for her mother’s death.

There is a bible study going on at the prison and Clay is in it.  Roosevelt comes into the ice cream shop and see’s the broken window. He assumes it’s just another day in the life of Jax. Speaking of life Roosevelt tells Jax the DA will be watching him live his and not to go and cause any trouble.

Tara is with her lawyer who is extremely pissed. Margaret decided to come clean and tell her that Tara faked her pregnancy.

Clay is in his bible study group and decides that he needs to inform the priest that it is in fact pussy that saves him and not Jesus. Clay then begins to yell pussy repeatedly. A guard comes over and Clay quickly puts a end to his interference by biting his fucking nose off, lots of blood. Some more guards come over and restrain Clay.

Nero shows up and tries to reason with Jax. Which of course doesn’t work. Jax tells Nero if them working together is going to work personal business has to stay out of it.

Chucky shows up and tells Jax the DA slapped him with a health violation. This bitch is up in everybody’s business.

Jax jumps all over Gemma when she shows up for sending Nero to try and fix her mess. Gemma gets pissed and tells Jax that Nero could have given him up to the DA but instead he took the blame for the gun the shooting was done with. That shut Jax up.

Tig walks in and gives Jax the address to Putner’s. When Jax gets there he assures him he isn’t going to hurt anyone and just wants to know why his daughter threw the rock through the window. Putner explains that she has anxiety attacks and is bi-polar.

Tara is at the daycare with the boys when Nero shows up. Nero tells her that Gemma is not going to backmf own and this is not going to end well for her. Tara tells Nero if he is smart he will get away from Gemma before he ends up like her last ex….dead.

Clay is all nice and cozy and secure in a prison holding room. A doctor walks in and tells the two guards to leave. Once they are gone the doctor loosens Clay’s restraints, hands him a cell phone and tells him he has 45 minutes before the new shift starts.

Gemma goes to see Margaret and threatens her. Gemma makes it clear she is going to tell Jax what Gemma already knows….that Tara lied. Margaret slips up and all but confirms it. Gemma tells her when Jax finds out she did there won’t be enough security in the state to protect her.

Jax and company take a vote it’s unanimous. Jax goes to the DA and offers up the Irish if she agrees to give him and the club full immunity from any past or present indiscretions and let Tara off the hook. After a bit of bs from both ends she agrees to the deal.

Nero and Jax get into a fist fight. Gemma comes running in to break it up. Jax gets all up in her business and tells Nero some things about her. Gemma has had it and in her anger she drops the bomb that Tara is a lying liar who lies. She was never pregnant, she plans on divorcing him and taking the boys away from him. Gemma tells Jax she is sorry.

Tara’s lawyer shows up for what she thInks is a meeting with Unser. Nope it’s Jax she is going to speak with. Jax tells he wants the truth. He ask if Tara was planning on divorcing him. She tells him yes. Jax then ask if she is planning on taking the boys. Tara’s lawyer says yes again. Jax ask her if Tara was really pregnant. The lawyer tells him she thinks Tara lied. Jax tells her to get out. Unser comes in and reminds Jax that
he promised no one would get hurt.

Jax goes to the ice cream shop. The girl is there and she apologizes she then thanks him for saving her home.

Tara is rocking the baby. Gemma is smoking. Nero is in bed thinking. Jax is getting ready to light up. Back to Tara she is rocking a gun with the baby.

If you want a sneak peek video & synopsis of next week’s episode, “Huang Wu” check out the preview of episode 10 below!

“Jax face some more major turbulence from the Irish when he tries to push his club forward.”