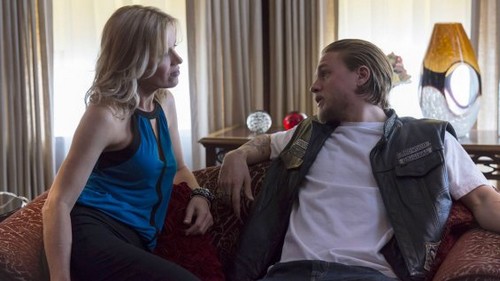 Last night was the season 6 premiere of SONS OF ANARCHY and we have review of what went down for you.  The show opens up with Jax writing in his journal. We know this is for his boys and its pretty much just his way of telling them things he feels they need to know when they get older. Jax is currently writing about the fact he is a father and he owns up to the fact that he has made some mistakes. (You ever wonder if the sons in the title is directed at Jax’s boys and not our cast of characters? Just a thought….) Jax is heading out to go see Tara in jail and picks up one of his boys along the way, he kisses him and tells him to behave for grandma (I bet being called that damn near kills Gemma, lol).

Otto is in his usual place, by which I mean prison. Someone is coming for a visit. With them they bring Otto the gifts of a ass beating as well as a ass raping ( which to me serves no purpose other than to remind us that dude is f**ked …literally… only this time he can no longer talk).

Jax meets up with August (Anybody else going to miss Harold Parrineau? I hate how he is always cast as the bad guy in 99% of the roles he gets. Oz, Lost, this show, the list goes on), who reminds him that he will still have to deliver Tig. Neither knows whether Clay is still dead or alive.

A kid passes by Primo (Dave Navarro…..he is so freaking hot) he takes a gun without being noticed (more on that later).

Ally is visiting with Tara, who refuses to see Jax. (I wonder if Tara has gotten fist raped per Gemma’s wish yet. (Is that even a thing? Maybe I should ask Jodi Arias. Lord knows that girl isn’t shy about sharing the details of her sex life). Outside Ally explains to Jax that Tara thinks that good old mommie dearest called the cops on her. Meanwhile over at Teller-Morrow Ima Tite shows up and tells who ever will listen that Lyla got the hell beat out of her.

Gemma is with Nero in a bar when Jax shows up to give her the third degree about turning in Tara. Naturally Gemma deflects and then places the blame on someone else… Wendy. But before Jax can read her the riot act Lyla shows up looking like she did in fact get the hell beat out of her. Apparently she was making a torture porn and failed to realize there would be torture involved even though its right there in the description. Nero thinks they should take this up with the the Stockton boss before heading off to kill (I mean discuss the situation with the Persians). Jax thinks they need to kill (I mean check out the situation before causing any trouble). Which means there is definitely going to be a whole lot of trouble.

Lee Toric pays a visit to a very much alive Clay and tells him that his in with the ATF is what has kept Clay out of the general population and allowed him to escape his death sentence to be handed down by Damon Pope’s men. Toric wants to bring SAMCRO down on its knees as revenge for his sister’s death. Toric offers Clay a deal that would keep him safe as a kitten but it involves him ratting out Jax.

Wendy stops by to tell Gemma she isn’t going to fight for custody of the boys.

Unser stops by for a visit with Gemma. Gemma thanks him for all the help he has been with the boys. Unser wants to know why she hasn’t said anything about Clay. Gemma explains its because she doesn’t plan on saying anything about him…today or tomorrow.
Or any day for that matter. Thanks for asking.

Toric pays a visit to Tara. Toric lets her know that it was he and not Gemma that got her locked up and he will be more than happy to get her off scot free if she will turn on Jax. Tara refuses.

Chibb’s in concerned about Juice being back. Jax tells him not to be that they should give Juice a second chance, besides if they all knew what Juice did it would just cause more harm than good.

Tig was left at the studio to his own devices. He is about to let one of the brothers out of the cage when the brother decides that talking s**t about Tig’s dead daughter is the way to win him over. It isn’t. Tig grabs him and then drowns him in a tub full of piss. Tig then pisses on him for good measure (Tig you crazy f**ker you never cease to amaze).

Ally stops by next for a visit with Gemma. Gemma makes it clear that she is pissed at her for implicating her in the whole Tara mess and that if she ever crosses her again it will be to bad for her. Ally is terrified (as she should be).

Clay is being led out to where the rest of the prisoners are waiting when he glimpses some inmates that look like they would love to get their hands on him. It’s right then and there we find out Clay has a weakness (his own immortality) and he decides to take Toric’s deal.

Jax heads over to the prettiest little whore house in charming to find out how the Madame (blonde) runs it ( and if you believe that…..). While he is there Ally calls him to inform him that Tara doesn’t want him at her hearing the next day.

Chibb’s shuts himself up in the garage with Juice and beats the kid repeatedly. Meanwhile Gemma stands and watches through the window.

Back at the whore house the Madame ask Jax to help with laundry (she means some help with her sheets).

Toric is shooting up.

Now to the scene that has been teased for awhile. The boy that took the gun earlier is sitting on a bench. You see under his shirt all the cuts on his arms. He takes the stolen machine gun out of his bag pack and walks into the school and starts shooting. (I don’t like this one bit, there is no need for one of the most popular shows on TV to glorify a nationwide epidemic of kids walking into to schools and killing).

Bobby takes out a map and writes QUINN on it.

Toric is dancing around naked.

Chibb’s is taking care of Juice.

Tara finally looses it and is beating the hell out of a inmate.

Meanwhile Jax is still with the Madame. (After all what is a boy to do when his wife wants nothing to do with him and there is a pretty blonde who needs help? Why have sex with the pretty blonde of course).

Anyone else wondering if maybe just maybe Jax might possibly end up being more sadistic than Clay ever could be?