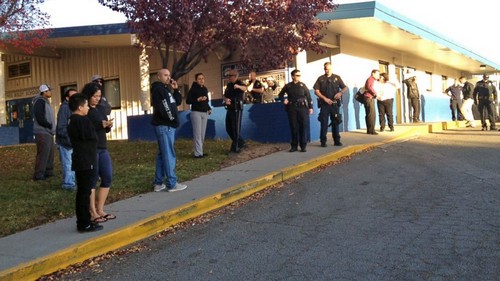 In another shocking news story that has rocked the nation, we have found out that yet another school shooting has taken place this morning, this time at Sparks Elementary School in Sparks, Nevada.

Police held a press conference earlier today, reporting that two individuals were dead – including the shooter from a self-inflicted wound – and two minors were in critical condition, currently admitted to Renown Regional Medical Center.

When the initial reports of a 12-year-old boy being shot were released this morning, they were followed by news of Sparks Middle School being ‘put on code red‘, and then reports that the killer had been ‘neutralized‘. The students at the school were reportedly immediately transferred to a local high school, where parents were allowed to come pick them up.

Governor Brian Sandoval released a statement saying, “I was deeply saddened to learn of the horrific shooting at Sparks Middle School this morning. Kathleen and I extend our thoughts and prayers to the victims and those affected by these tragic events.”

Although we don’t know the full details of what exactly happened during the shooting, this marks yet another school shooting in a long line of school shootings that have taken place in the US over the last few years. Why exactly are school shootings happening at such a rate? When will restrictions on gun control increase? When will the government learn that this will never end if they don’t make some sort of changes to the law?