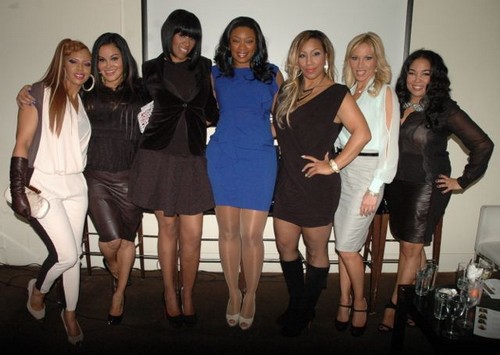 Last night in New York, TLC screened a new series, Starter Wives Confidential with a private introduction of the cast at Inc. Lounge in the Time Hotel and Celeb Dirty Laundry was thrilled to be there.  “A glimpse into the fascinating and Complicated lives of celebrity exes.”

It was no surprise to find out that these women are famous only because of who they slept with.  Josie Harris (ex-fiance’ of world champion boxer Floyd Mayweather Jr.), Liza Morales (ex-fiance’ of professional basketball player Lamar Odom), Tashera Simmons (separated from hip hop legend DMX), Monica Joseph-Taylor (separated from DJ Funkmaster Flex), Zakia Baum (ex-girlfriend of rapper Maino), and Cheryl Caruso (ex-wife of accused mobster “Philly” Caruso) want us to believe that by the sheer fact that these “famous” men impregnated them is reason enough to be featured on their own reality TV show.

Is there anything that makes this new reality show different from all the others?  The screening showed the usual cursing screaming catty bitchy women that always seems to be a prerequisite.  Tight clothes, lots of cleavage and too much time spent on bad hair and even worse make up.  Is there more to these women than their looks?  Zakia Baum claims to be dating Jesus and has her “vagina on lock down”.  Don’t mess with her because if you so purely turned the other cheek to ask for forgiveness she would most likely slap it.  Josie Harris has a devilish laugh who calls herself a “horny chick” and is ready to date but expects Floyd will be back in her bed soon enough.  She can sure throw a punch herself as we witnessed when she told Zakia “to go back to the gutter, girl”.  I expect that bout will go a couple of rounds in the first episode and though Josie is a tough chick Zakia is one crazy Christian.

Monica Joseph-Taylor acts like the momma bear, taking the ladies under her wing, sharing her wisdom and pushing them to be more like her, free and independent of their exes.  Though she owns ½ interest in her exes businesses she also runs her own blog, Mommy’s Dirty Little Secret.  But beware ladies she’s a bully and an instigator and she’s ready to stir things up just for fun.  Tashera Simmons fresh off another TLC reality show, Couples Therapy, is over her ex.  After four kids and watching “kids popping out of everywhere from a bunch of other women” she seems finally at peace with her decision to divorce the “loser”. The most sympathetic of the ladies is Liza Morales she clearly hasn’t gotten over the death of her infant son or the rejection from Lamar Odom.  The ladies joked that their mission is “to get Lisa laid”.  She is a “Lamar virgin”, she’s had no men before or since.  Won’t it be fun to watch the girls set her up and excitedly waiting for the moment she breaks her 4 years of abstinence.  Did someone mention Kris Humphries’ and sloppy seconds?  Ewwwww……

I wasn’t going to bother mentioning the last starter wife, Cheryl Caruso.  It’s obvious that she’s only invited to the party because she brings the Tequila, organic Tequila, Talero.  I guess TLC couldn’t afford their own because why else include her if it wasn’t for the free liquor, it can’t be for the fact that her ex is a convicted felon and doing fifteen years to life in prison.

Tune in to Starter Wives Confidential and you will see what these women are really like and why their men left them.

[CLICK ON THE PHOTOS BELOW FROM THE EVENT TO MAKE LARGER]