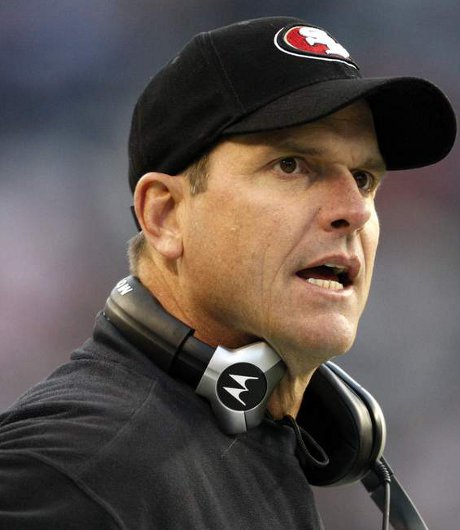 New Orleans  is going to be a tense place to be for the families of Super Bowl XLVII coaches John Harbaugh and Jim Harbaugh, as the brothers will be playing against each other for the NFL Championship ring and Lombardi trophy next month.  Though this may not be one of the biggest story lines of the Super Bowl it is definitely the most interesting.

In case you missed last night’s game against the New England Patriots, the Ravens put the Patriots in their place and shut them up.  Winning the AFC Championship put them in this year’s Super Bowl pitting John against Jim.  So what do the brother’s have to say about this?  Jim didn’t have much to say about the situation.  John on the other hand had this little blurb to share, “Let’s cut that out right now,” Harbaugh said in the postgame media conference. “We did that last year. It got old last year, did it not?”

Who will their parents, Jack and Jackie Harbaugh, be cheering for?  Neither parent has commented on this moment in Super Bowl history, but younger sister Joani Crean gave Yahoo! Sports the following statement, “[I’m] overcome with extreme pride for both of them.  [I] can’t describe my feelings beyond that. I have two incredible brothers.”  Nicely put Joani, but who are you rooting for?  This year’s Harbaugh family reunion is sure to be AWKWARD.

What do you think readers?  Who will you be rooting for come Super Bowl Sunday?  Will you be going for the Ravens solely because you enjoyed Michael Oher’s story in The Blindside?  Will you , like myself, be watching with happiness at the fact that Tom Brady and his asshole Patriots are not in the game?